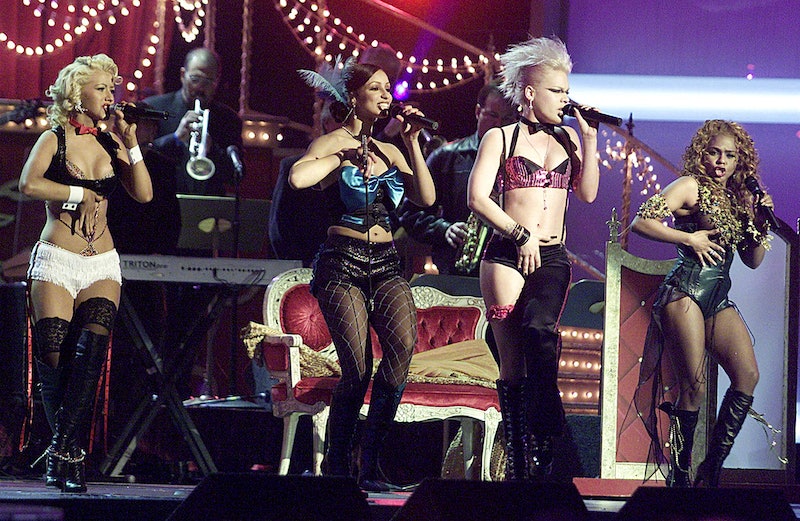 There are two types of people who roam this spinning orb we call Earth: those who know every last lyric to the cover of “Lady Marmalade” that’s on the Moulin Rouge! soundtrack, and those who don’t. In 2001, Christina Aguilera, Pink, Mya, and Lil' Kim kicked open the tufted boudoir doors of FM radio and took over with their rendition of the LaBelle classic. It was THE single of the year. Your best bet was to sing along every last time you heard it on the radio, because to resist "Lady Marmalade" was to resist happiness.

Whenever I hear the song, both the "Lady Marmalade" music video and the 2001 MTV VMAs performance automatically pop into my mind. I picture the corsets, the gilded vanities, the plush chaise lounges, Xtina's crimped-to-the-heavens 'do, et cetera. (The top hats bedecked with tulle my dance class wore while pirouetting along to “Lady Marmalade” at a recital also pop into my mind, but enough about my life.)

But if my noggin is REALLY on its A game, it asks, "Hey Kristie, do you remember the 'Lady Marmalade' that happened at the 2002 Grammys?" And I say, "OH, MAN. Thank you, Mind. Sometimes, you are a foggy demon, but sometimes you really, really pull through."

Yup, we are most definitely revisiting that particular performance now. Here are the highlights of that spectacular spectacle of a stage show:

If I ever find myself with an overwhelmingly large amount of money (LOLOLOL that'll be the day), I know exactly what I will spend it on: the robes worn by Lil' Kim, Pink, Mya, and Xtina onstage during the '02 Grammys. Just look at these flawless garments:

Xtina showed the color red who is boss.

The moment when Xtina struggles to remove her robe

Xtina is a mortal after all.

There are costumes on costumes! It's costume Inception!

Obviously, she had to cut the robe loose before this moment. She wasn't about to let that robe get in between her and that note.

Wearing only the finest solar-powered leisure suit, of course.

Not trying to rub it in, VMAs, but you cannot compete with a suprise appearance from Missy Elliott.

Not trying to rub it in, VMAs, but you cannot compete with a surprise appearance from Patti LaBelle.

It was the stage entrance of the century.

The moment when Patti LaBelle flings the train away

Begone, pesky train. You are no longer needed. Patti LaBelle's got this, thank you very much.

The moment when everyone bows to Patti LaBelle