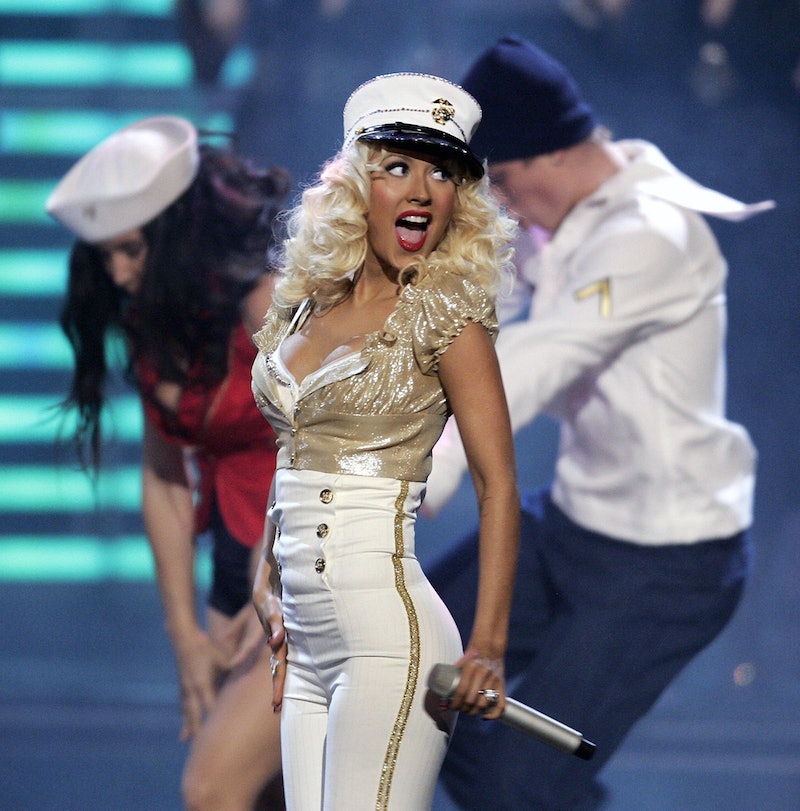 In the nearly 20 years since Christina Aguilera began taking the music industry by storm, fans have seen the pop star's style, persona, and sound go through a lot of changes — and nothing indicates this evolution than her videos. Each of Christina Aguilera's music videos embody precisely where she was in her career at that time. From her bubblegum beach setting in "Genie in a Bottle" to the David Lynchian-esque sci fi "Fighter," Aguilera has changed her image a lot — and each video is a benchmark in her creative and personal growth.

It is because of this constant innovation that Aguilera's fans have become an extremely varied bunch over the years. Some love her for her powerful vocals, some for how proudly she embraces her sexuality, and others are just huge fans of her compassionate, tough love judging style on The Voice. In fact, her music videos are such direct reflections of her ever-shifting sensibilities that it's pretty easy to tell what kind of fan you are based on which one is your favorite.

Do you go for the down and dirty party scene? The creepy experimental dreamscape? The flashy burlesque number? Here's what your favorite Christina Aguilera music video says about you as an Xtina fan!

This David LaChappelle-directed masterpiece showcases Aguilera's steamier sensibilities more iconically than anything else in her videography. Honestly, this one is probably my favorite, and it's because I have always loved the intelligence, controversy, and fierceness Aguilera brings to her depiction of sexuality. Maybe I'm projecting, but if this is your favorite, then you probably fall in the same camp.

You actually prefer when Aguilera aims for a more polished veneer, discussing sexuality with nuance, innuendo, and candy metaphors.

A few months ago you had a little too much Pinot Grigio before bed and rented Burlesque online. Although Cher was great, you didn't love or even finish the movie — but you can at least acknowledge that this is a pretty good song.

"Bound to You" (From The Major Motion Picture Burlesque)

Completely sober, you saw Burlesque in theaters and loved every second of it. Cher (whoever that is) was OK, but Aguilera stole the movie in your eyes, and you cried several times. You're also too young to remember Moulin Rouge.

The late '90s/early '00s was your era, and you always preferred Aguilera to Britney Spears because of her powerful voice (and you love vocal runs). Also, you may feel a little silly about it now, but you definitely sobbed through the entirety of Moulin Rouge at least once a month throughout your late teens — so Christina Aguilera's indirect connection to the movie made you love her even more.

You love when Aguilera proves she was the original Lady Gaga, circa "Born This Way."

"Genie In A Bottle"

You're actually a Britney Spears fan.