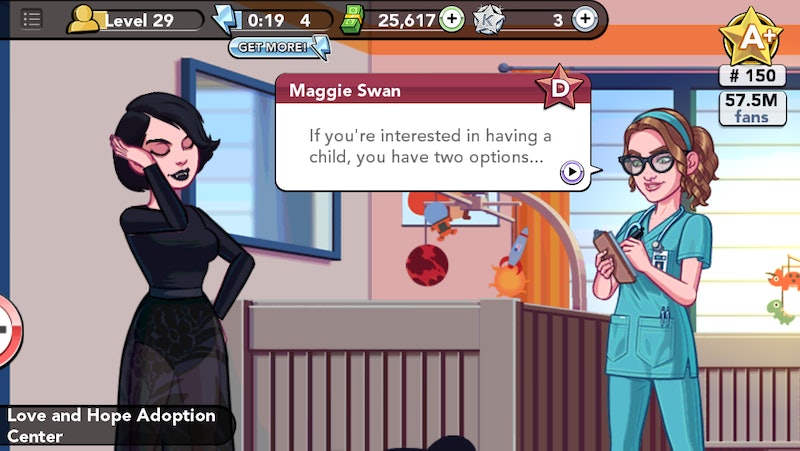 Last Thursday, Glu Games tweeted a very important announcement about Kim Kardashian’s krazy-successful mobile game: The stork was just about to drop a bundle of babies in the Kim Kardashian: Hollywood world. Friday, the KK: H app icon caught my eye. It looked different. The update happened, I thought. The babies are finally here. There was only one way to find out if my assumption was correct: I had to play right that second (twist my arm). Hey, all in the name of investigative journalism, right? I know, I know. I'm so noble.

The first three times I tried to open up the app, it krashed. (Little did I know that this would be an omen for things to come.) Rather than give up, I soldiered on. I guess the fourth time's a charm, because on try number four, the game finally loaded. And then, a video message from a blonde Kimmy K. appeared. She cut right to the chase: Kim Kardashian: Hollywood avatars can now give birth to or adopt children.

So, how does my avatar go about doing just that? What should my avatar expect when she's expecting? Where do babies come from in the Kim K. iPhone game?

To the Love and Hope Adoption Center we go!

A bespectacled character named Maggie explains your options: 1) have a baby with a partner or 2) adopt.

My avatar is a single lady (after three failed marriages, she's content with flying solo for a while), so option #1 isn't really on the table at the moment. So, what about adoption?

Will do. Thanks, Maggie! Hello, Tim and Jillian.

Tim was closer, so I talked to Tim first.

I am, indeed. You'll never believe what's going on over there on the other side of the room. Tim is more or less rubbing my nose in my lack of K Stars. He's being real smug about it. I'm totally going to tell Maggie.

CRIMENY. Is this some sort of joke? You mean to tell me I either have to a) spend real money on K Stars, or b) make my avatar start a relationship with some knob?

You said it, Herc.