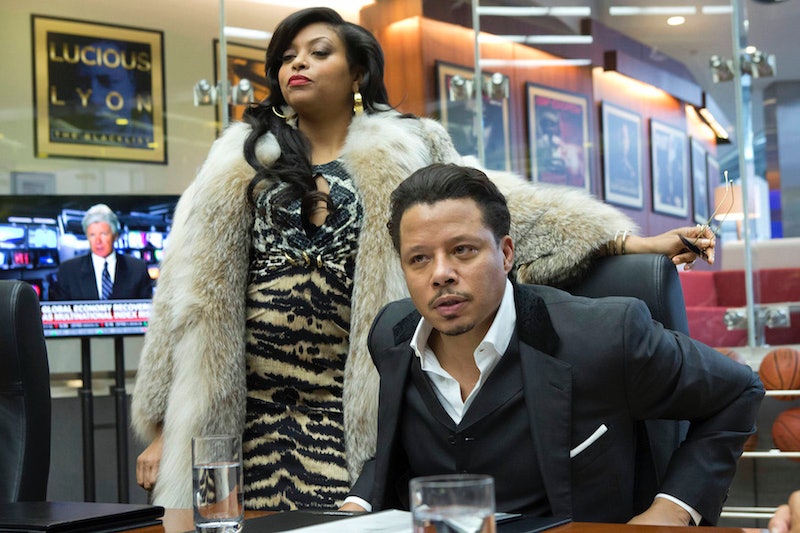 Fortunately, the current void in Wednesday evening's TV lineup will end when Season 2 of Empire premieres in September. Until then, fans of the popular hip hop drama are probably tiding the time between seasons by dreaming up more jaw-dropping story lines for the Lyon family's drama-filled future — but, in case you're concerned that the Empire Season 2's juicy drama won't top the last, good news: You can put a temporary pause on creating an imaginary fight between Cookie and Lucious. Turns out, there have been some interesting new developments in the Lyons' world that may require you to brush up on your Shakespeare and Game of Thrones knowledge.

During an appearance at the ATX Television Festival, Empire co-creator Danny Strong had this to say about Empire 's second season: "Season one was who will inherit the throne, and season two is warring kingdoms." Strong added, "So you'll see the kingdom go to war for the throne."

Well, doesn't this sound like quite the fitting theme for Empire? Cookie's fabulous fur coat collection alone is fit for a queen, so that clearly coincides with the royalty-inspired plot. And all this drama started when Lucious decided to pit his sons against one another instead of simply choosing an heir for his record label — that move certainly brings a few famously power-hungry, maniacal kings to mind, so again, the connection makes sense.

But, what else can we expect from Season 2 of Empire?

Sorry, Cookie. According to Strong, more flashbacks are on the way — which means more trips back to those less-than-glamorous days you and Lucious shared in Philadelphia.

There Will Be Plenty More Battling

As Strong added: "The continuation of those battles is what I dig the most." Because what's the point of the show if the Lyons stop fighting?

Plots Inspired By Game Of Thrones And King Lear

According to Strong, the writers talk a lot about Game of Thrones , so we can expect some mythology and battle-inspired themes. Just, no dragons. Probably.

There Will Be 18 Episodes

Due to the show's success, that number is up from 12.Who else needs this show back on now?