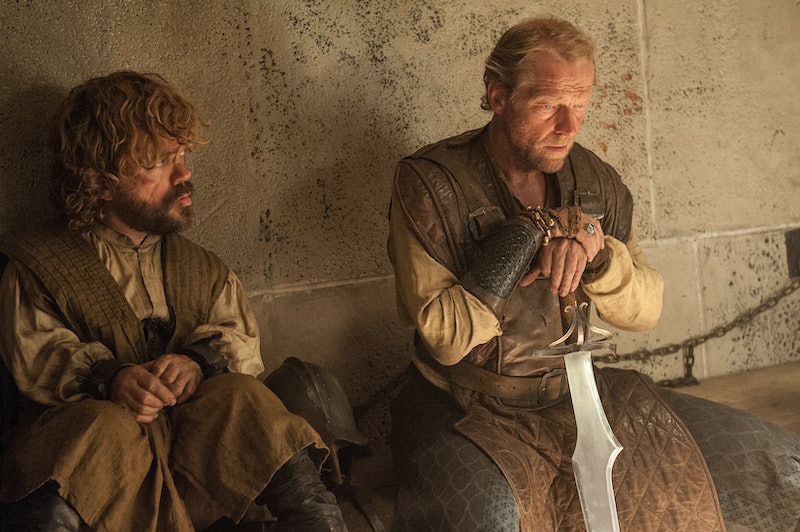 Daenerys may have just made one heck of an exit, but the work is not over in Meereen. It's a shame that the other two dragons, Viserion and Rhaegal, were unavailable to give rides to all of her friends and advisors. What happens to Jorah, Tyrion, Daario and Missandei on Game of Thrones now? The episode "The Dance With Dragons" ended on a beautiful shot of their faces as they watched their Queen fly off, so what's next?

This situation is already a little bit different in the books. It is not the Sons of the Harpy who sack the city, but an invading army from Yunkai, one of the cities that Dany had "liberated" earlier on her tour. So we shouldn't hold the fate of any of these characters in the books to dear when it comes to the HBO series. In fact, if Hizdahr zo Loraq did in fact die from stab wounds in Sunday's episode, then we've already made a departure from what happens in the novels.

That said, I doubt that it's smooth sailing for Team Dany now that they're stranded in Meereen without a Queen. (Say that five times fast.) Daario Naharis is held hostage in a prison cell, with the lives of the two remaining dragons as the bargaining chips for his life. Meanwhile, Missandei assists Ser Barriston Selmy with the rule of Meereen in Daenerys' absence. He notes that Missandei reminds him of both Petyr Baelish and Varys — which absolutely thrills me. I'd love to see Missandei take power and get sneaky. There has to be more to her than her blossoming romance with Grey Worm.

I'm guessing that Tyrion Lannister will be taking up Selmy's role now that he has died on the show. He has completely departed from his story with Jorah in the novels, which is for the better I think. Nobody wanted to see Tyrion become a type of circus performer, right? Jorah, on the other hand, has greyscale. Literally! The infection is on his hand. How is that going to affect his fate? I thought for sure he was going to die this week. Surely he has spread the disease to someone during his time in the fighting pits, right? While in the books, he remains a soldier quietly supporting his lady love's cause, I have a feeling that his situation is going to get a bit more hands-on (I did it again) on the HBO series.

So, presuming that the Sons of the Harpy are contained by the threat of dragons, I'm guessing that these four will become Game of Thrones newest A-Squad as they try to maintain peace is Meereen and the surrounding Essos. I'm looking forward to seeing all of them face this challenge together.