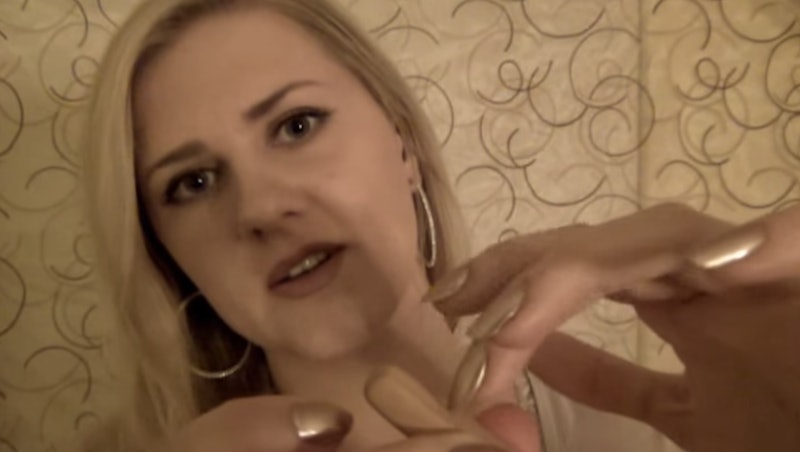 'Tis the season for all kinds of unexpected stressors. We're smack dab in the middle of wedding season, which means a lot of pretending to care about stuff before someone gives you cake. It's starting to get hot and all of a sudden we're dealing with underboob sweat. Wrap this all up with the fact that denim shorts are a recipe for perpetual wedgies (help me), and pretty much the only cure for your summer stressin' is this woman who whispers on YouTube to relax people faster than you can say "namaste". Believe me, once you listen to Maria, the genius behind the channel GentleWhisper, your life will never be the same.

Let me just say as a disclaimer to this article that I am the last person to buy into anything that looks vaguely like hypnotism. I have the attention span of an untrained labradoodle, so I tend not to enjoy anything that makes me sit still. But I just watched one of Maria's video and I swear to god, guys, two minutes of my life went by faster than I could blink, and I'm pretty sure I am de-stressed enough to take over the world. (So, fair warning, major governments. Here I come.)

Maria's craft on YouTube isn't just happenstance. She has mastered the technique of ASMR, or autonomous sensory meridian response. The idea is that particular sounds can cause actual physical reactions in the body, like warmth and tingling, that help the body relax. She did an example video for the Washington Post here:

In order to mimic different sensations, like brushing people's hair, brushing their ears and cheeks, and whispering in a relaxing manner, Maria uses a 3D microphone that helps to simulate the actual situation.

Maria said in an interview with Cosmo that she first stumbled upon the ASMR community in 2009, after a bad breakup. She said that during the day she would occasionally experience so much stress that she would listen to a video in the bathroom at work to calm herself down. Eventually she was inspired to create her GentleWhisper channel, where she has racked up millions of views and made a ton of other friends in the ASMR community, including her current boyfriend. The bond of performing ASMR on each other has brought them closer together.

Maria used to work as a medical assistant, but she says that now she earns enough from her work in ASMR that she is able to support herself solely on those earnings. She hopes to launch a website in the next few months featuring more downloads of her work.

Here is another popular one you can try out for yourself. Remember, you've got to wear headphones for the full effect. See y'all on the ~other side~.