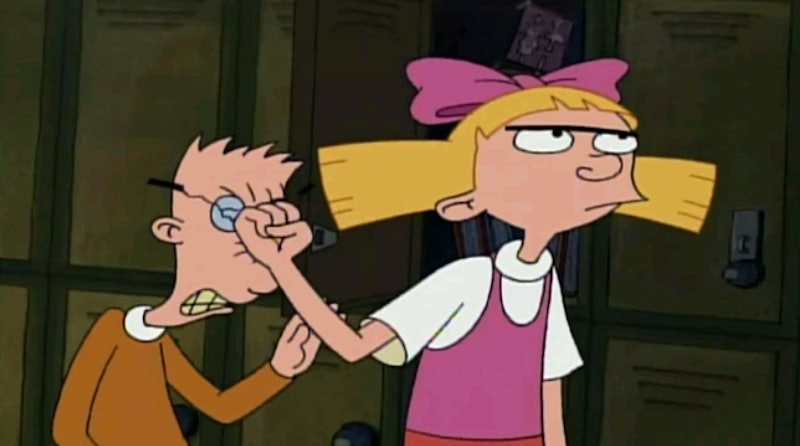 Like any adorable millennials, my formative years were shaped by the media I consumed... that is, the impressive influence of Nickelodeon cartoons. Angelica Pickles from Rugrats was the first mean alpha-blondes that I sickly aspired to be, a keen badass that put those dumb babies in their place. But my real soul sister, from unibrow to bangs, is without any doubt Hey Arnold's Helga Pataki, the bully slash romantic heroine we all secretly were inside. And let me just say, all Hail Helga.

Though similar in temperament and definitely pro-pigtails, what separated Helga from Angelica was that Helga was a deep well of mixed emotions, complex and sympathetic. Helga was also 9 years old and probably deep in the throws of puberty (she was very obviously wrestling with her lust for Arnold), so, for those of us struggling with that constant discomfort, it was easy to relate to her struggles. While the initial narrative would jokingly position Helga as Arnold's stalker-y tormentor, any girl with a crush and a penchant for unprovoked rage knew what she was going through.

So, as we come up upon the 11th anniversary of Hey Arnold's last episode (I know, we're ancient), let's reflect on all of the times Helga Pataki was relatable AF.

1. When she had to mask her love with constant teasing.

This is a defense mechanism that we all employ on the playground at some point or another, and, while little boys are often unaware that it's even happening, sensitive girls of the Helga Pataki variety are self-aware enough to acknowledge those feels. Truth be told, I STILL do this, and everyone I've ever dated can vouch for that. If I'll go out of my way to emasculate you, there's a 95 percent chance I want you. Generalized kindness, however, is a dead give away that I will never sleep with you. So it goes.

2. Whenever she took solace in the shrine to her beloved.

You may not have made a full-sized replica of your crush out of used bubblegum (and I refuse to confirm nor deny if I did), but don't be self-righteous. If you've wasted five hours scrolling through the F*** Yeah Harry Styles Tumblr, you've overindulged in an obsession, Pataki-style.

3. Whenever she was weakened by her inferiority complex.

If it wasn't that overachieving Olga, it was that goody-two-shoes Lila. Helga was pigeonholed as "one of the boys" due to her abrasive, aggressive attitude, and the many altercations she had with other women showed how deeply insecure Helga was... in her femininity and otherwise. While this isn't a good thing, it's a very real thing, and showed another layer of this hardened little girl. We'll tap upon this later, but it's my hope that Helga learned to overcome the comparisons and embrace other women as much as she (the other 75 percent of the time) embraced herself.

4. Whenever she had no tolerance for creeps... although you're probably less likely to resort to a face-punch.

Even though he and Helga were both burdened with unrequited feels, Brainy is the one who comes across as the OG creep. We've all had a Brainy breathing heavily on our neck at the club, and we've all wanted to give him a good smack, but, chances are, you just grab your friend's hand and try to sashay away from that situation.

5. When she (sorta) invents the drunk dial.

Remember that episode where she gets super loopy at the dentist and calls up Arnold professing her undying love? Like you didn't write an equally impassioned 3 a.m. text message to your ex last Saturday. I mean, you misspelled "cornflower," but other than that...

6. When she kept kind and patient company.

Behind every badass there's a meek but bright girl that has her back. Phoebe, an intriguing character on her own, was the best friend that every... let's say "difficult" girl needs. She understood Helga had a good side, and would support her without question. That foil was another essential key to showing that Helga was more than a demented bully with a crush.

7. When she dolled herself up to fit in with the other girls, but found her strength.

"RHONDA, DARLING!" In "Helga's Makeover," Helga appears in in Rhonda's doorway, red lipstick caked on and eyebrows tweezed shoddily...and it's an image that sums up my life to this day. She embodies a parody of womanhood in her efforts to blend in at the slumber party... partially for revenge, which you gotta love. And, ultimately, she rejects it, because she looks at the big picture, recognizes that they can still count their age on two hands, and that they should pump the breaks on adulthood right now. Blending that initial insecurity with a renewed courage makes for masterful television.

8. When she was fueled by anger, always.

"Angry" isn't a trait commonly attributed to 9 year old girls, but, aside from her swoony love for Arnold, it's a word that defines Helga. And that's great! Anger is what promotes change ("maybe we shouldn't be wearing face masks"). Anger is what keeps you from tolerating anyone's crap (constant smack talk from Harold and the other boys). Anger is a great motivator, something we shouldn't shy from when it comes to portrayals of hormone-addled, gender-role-challenging little girls. Mix in a hidden sensitivity, and you have a compelling character that'll inadvertently inspire and relate to a generation. Helga Pataki is that character, and I'm so glad that we had her around.