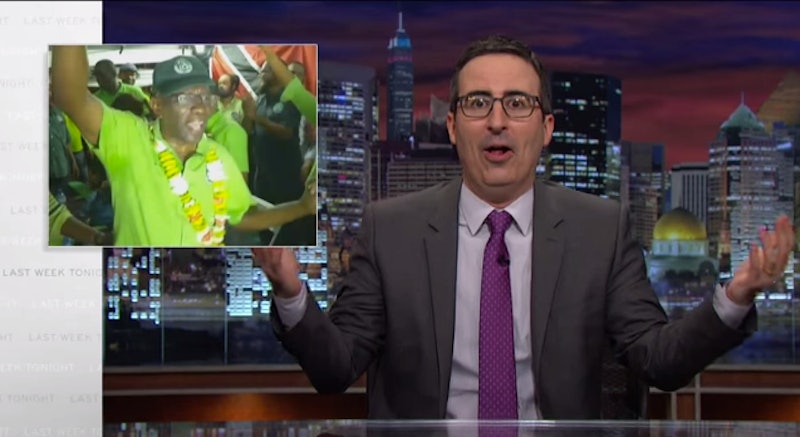 Amid the deluge of coverage of the FIFA scandal, there has been one journalist who has really entrenched himself in the story. Beginning last June, long before 14 FIFA officials and corporate executives were indicted on various corruption charges, Oliver has been revealing the nefarious dealings of soccer's governing organization. And last Sunday, Oliver seemingly prompted FIFA President Sepp Blatter to step down after making a plea to the organization's sponsors. Now, the Last Week Tonight host is going after former FIFA Vice President Jack Warner: John Oliver will address Jack Warner on Trinidadian TV channel TV6 on Tuesday night, and here's how you can watch it in the States.

Last week, Warner bought air time on some of Trinidad's biggest TV networks to deliver a seven-minute message that promised to spill more of FIFA and Blatter's secrets. Ostentatiously titled Jack Warner: The Gloves Are Off, the segment showed Warner claiming he had proof that FIFA influenced the the 2010 Trinidad and Tobago national election, which secured him a high position in the Trinidadian government.

As always, Oliver's come up with the perfect way to respond to Warner's message, which, if Oliver's segments on FIFA and Blatter are any indication, could lead to some very real actions against Warner. Beating Warner at his own game, Oliver has purchased his own air time on Trinidadian TV network TV6 to deliver his video, which is hilariously titled "John Oliver: The Mittens of Disapproval Are On." It will air at 9:01 p.m. on Tuesday night.

On his most recent show, Oliver said:

We had more to say to Jack Warner than we had room for here, so we bought five minutes of airtime on Trinidad’s TV 6 at 9:01 pm on Tuesday. We will be preempting the first five of minutes of — and this is true — Mike & Molly, and we’ll be doing it with John Oliver: The Mittens of Disapproval Are On.

If you're like me and dying to watch the segment, you can actually stream it live straight from TV6's official site. Or you can wait for Last Week Tonight to upload it to its YouTube channel after it airs, which it will most likely do, as it does with regular segments.

There are at least two reasons why Oliver's message for Warner should be taken pretty seriously — despite how hysterical it will surely be. One year ago, Oliver called FIFA a "comically grotesque organization" and listed a laundry list of reasons to back his claim. At the end of last month, his claim was validated when Swiss officials arrested nine FIFA officials and five business executives with ties to the organization on charges including racketeering, money laundering, and wire fraud.

However, at the time and immediately following the arrest, the soccer organization's head honcho, Sepp Blatter, had received zero punishment and was even elected to a fifth term. So Oliver took matters into his own hands and implored FIFA's sponsors to get involved, promising to endorse their products if they helped get rid of Blatter. Lo and behold, two days after Oliver's segment Blatter announced his resignation as FIFA president.

Proving that he's a man of his word, Oliver donned the opulent Adidas shoes with wings, took a bite out of every item on McDonald's Dollar Menu, and even did what he probably never thought he'd do in his entire life — he drank a Bud Lite Lime.

Bud Lite Lime may taste like your tongue is angry with you but, after seeing Sepp Blatter leaving, to me, it tastes ... [opens bottle and chugs the entire thing in one go] ... delicious!

So far, that's two for two for Oliver. With this kind of track record, Warner should be scared. He should be very scared.Images: Last Week Tonight With John Oliver/YouTube