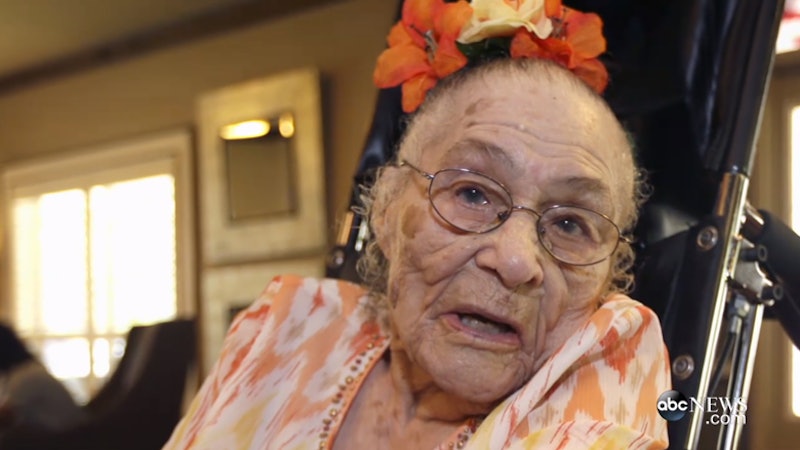 After former world's oldest person Gertrude Weaver spent "only" (and it's in quotes because hey, she was 116 years old) five days with that distinction before dying on April 6, 538's David Goldenberg investigated how the title of world's oldest person has changed over time. It turns out that as people live longer, they're holding this title for a shorter period of time and being followed by people closer in age to them. Goldenberg explains over at FiveThirtyEight:

As we enter an age with less war and infection and fewer accidents, more and more people with these superior aging genes have been able to make it to a point in time when they can show them off. It’s getting crowded at the top.

So, it's not that people are dying sooner, but rather that they're acquiring the title later because there are more people ahead of them. For instance, Jeralean Talley, the current oldest person in the world, is just 44 days older than her runner-up, Susannah Mushatt.Since the world's oldest people are coming and going in such rapid succession, we're seeing constant news stories about different heiresses to the throne (everyone with the title has been a woman so far), which means more words of wisdom for us pre-centenarians. To take advantage of all the advice out there from interviews with the world's oldest people, I've curated this super-centenarian's guide to life.

“Treat people right and be nice to other people the way you want them to be nice to you,” she said in an interview with Time last year.

When asked about her long life, Okawa, who passed her title down to Weaver when she died at age 117, said, “It seemed rather short." Perhaps that's why she made sure to eat lots of cake at her last birthday.

3. Oldest person ever Jeanne Clement wants you to smile... but not in a creepy way.

While I wouldn't encourage appeasing that creep on the bus who tells you you'd be pretty if you smiled, smiling has another purpose, according to Jeanne Clement, a French woman who broke a world record by living to 122: "Always keep your smile. That's how I explain my long life." And apparently, it worked for her, despite being an avid smoker.

4. Second-oldest person ever Sarah Knauss kept busy until the end of her life.

Knauss, the oldest living person ever in the United States, advised others to "Keep busy, work hard and don't worry about how old you are." She was known for being constantly involved in her work and community, sewing clothing for her family up until the last day of her life.

5. Oldest man ever Jiroemon Kimura let the many, many things that didn't kill him make him stronger.

Kimura, a Japanese man who lived to 116, told Patch that there's no point sweating the small stuff — or even the big stuff — because "after every storm, peace always comes." He added that he survived the death of his wife and two kids by not letting any one thing determine his happiness. His motivation to live, he said, was "impossible to pinpoint. If you try to do that, you will lose hope and the world can be a dark place."

These philosophies seem to have worked for the people that espoused them, so you bet I'll be taking these words from the world's oldest people to heart and keeping their memories alive in the process.