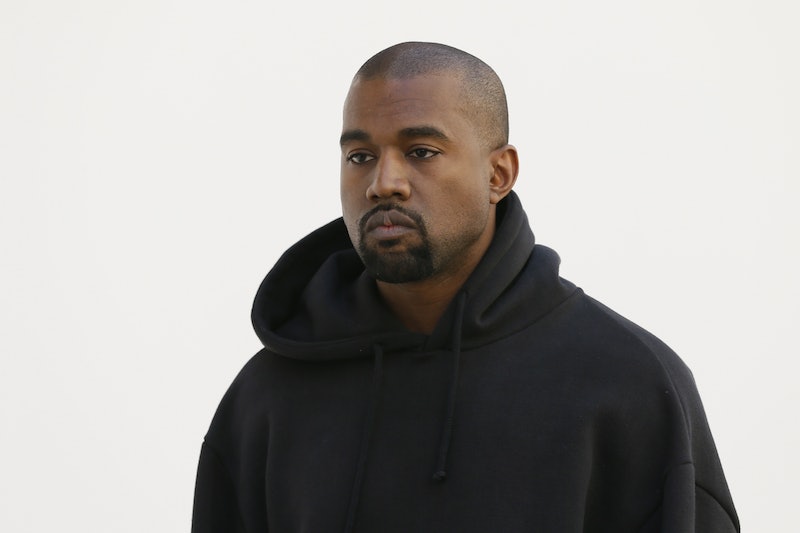 For all of life's problems, ice cream is usually the solution, especially if you're Kanye West. Few things in life actually make this man happy, except for his daughter, North West, and, of course, not smiling... and vanilla cones. When West was caught grinning at his ice cream alone in his car in 2013, he made headlines. But don't worry — the fun doesn't stop there! West has actually been smiling at his ice cream for years, and somehow, it managed to slip by us all. Every single time the paparazzi have caught him grabbing dessert, whether it was with Kim Kardashian or by himself, he's been over the moon delighted to eat his favorite frozen treat.

And regardless how you feel about West, it's impossible to deny that the evidence of this is pretty precious. Although it's been well documented that West used to be much happier, these days all it takes is a couple of scoops to make him smile. What do you get the man who has everything? As it turns out, anything off the Dairy Queen menu.

Nobody understands a deep, overwhelming love of food than I do, so it makes total sense to me that West may not always look pleased standing beside the love of his life but does consistently appear thrilled by ice cream. If Kim is feeling threatened by this, I can't blame her. There is another woman in West's life, and she is made of frozen milk and sugar.

This photo is eternal. Every time I eat ice cream, I will try to elevate my experience to his.

2. Bringing Kim Along On His Date With Ice Cream

I wonder how she feels being a third wheel?

I wonder if she threatened to leave him for Jay-Z? It's possible.

4. When He Could Not Get The Ice Cream In His Face Fast Enough

5. When He Had To Make The Most Difficult Decision Ever

He had to ask for extra help from people at the ice cream shop. It was that serious.

6. And Then When He Brought Kim Along To Help Him Next Time

This was in Paris. Because when in Paris, eat ice cream.

7. He Bought A Sweater Dedicated To It

When you love something, you want a picture of it on everything you own.

8. When He Got Pissed That Kim Was Hogging His Ice Cream Spotlight

Do not get in the way of the real love story here, Kim. I don't care if this photo was taken just days before your wedding.

9. When He And Kim Giggled Over How Delicious It Was

No seriously, it's that good.

10. He Doesn't Even Have to Hold The Ice Cream To Love It