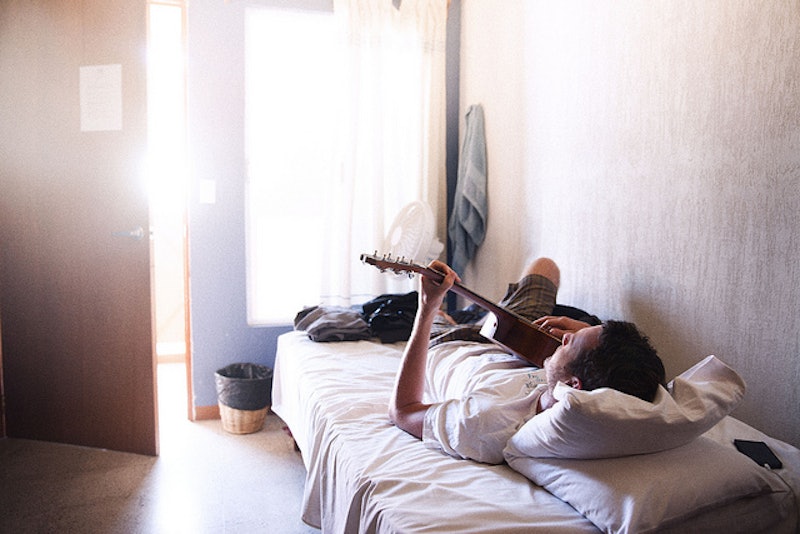 The whole boner thing seems to be a pretty straightforward process (pun intended). But what does an erection feel like? While us ladies are over here dealing with all of the things that come with having a vagina, dudes only have to worry about keeping that thing hidden whenever they pop one at an inopportune time. I mean, imagine never having to worry about that time of the month, or your yearly pap smear. Not to mention the extreme fear that revolves around leaving a tampon up there too long and dying a quick death due to toxic shock syndrome.

But enough about the complicated female anatomy, because as it turns out, there are actually a ton of interesting, not so obvious truths about boners that you have probably never even heard about. For example, did you know that peeing with an erection is a pretty tricky process? Or that there are actual tried and true methods for hiding one? Kind of makes you want to play boner hide and seek...

If you've never heard the phrase 6 to midnight, you'll want to read on. Here are 10 weird facts about erections that you're most likely in the dark about, courtesy of the dudes who deal with them on the regular.

"It can be very painful if you fall on it, because it can be like spraining an ankle. But with more, let's say, noticeable damage."

"Morning wood is absolutely a real thing, and it happens at the exact same time you have to take a leak. Your choices are either uncomfortably force it into position in order to get it all in the bowl, or leave it as is and lean in and arch it — kind of like a Bellagio fountain of piss."

"Boners are pretty much a daily struggle in high school. If you've EVER seen a high school guy carrying anything at all in the area in front of his junk....yeah. That's what is happening."

"They make tailored suit pants very uncomfortable. A good fitted suit, or any fitted pants or shorts do not take any increase in girth into account. Your only option is to discreetly tuck the beast up. And then once the Hulk turns back into Dr. Banner, just hope he returns to a favorable resting position."

"Ever hear of a guy talk about six to midnight? No, of course you haven't because we don't tell ladies these kinds of things. The best way to hide a boner is to flip it up into your waistband (hence, going from six to midnight). But if your shirt lifts up, you're out of luck."

"There are a ton of methods to hiding it. Some guy on here is definitely going to tell you about the six to midnight method and I salute that guy, because I think that is way uncomfortable. I tuck mine up by my pocket, which I think is more effective."

"When you've got a boner you can kind of control the movement of it a little bit. You know how some people can wiggle their ears? You've got about that much control over it."

"Really random things cause guys to get boners. One time I was in the shampoo aisle watching this woman buy body wash, and all of a sudden my dick could not sit still. I felt like such a perv."

"You can actually shake your boner. You know those kegel exercises? It's kind of like that. You can get a good 55 degree movement up and down out of that shit. Kind of like a windshield wiper."

"Women would probably be surprised to hear about the sheer number of boners that men experience on the daily. It's usually at least 5 or 6 a day for me. Imagine having to hide something embarrassing that frequently?"