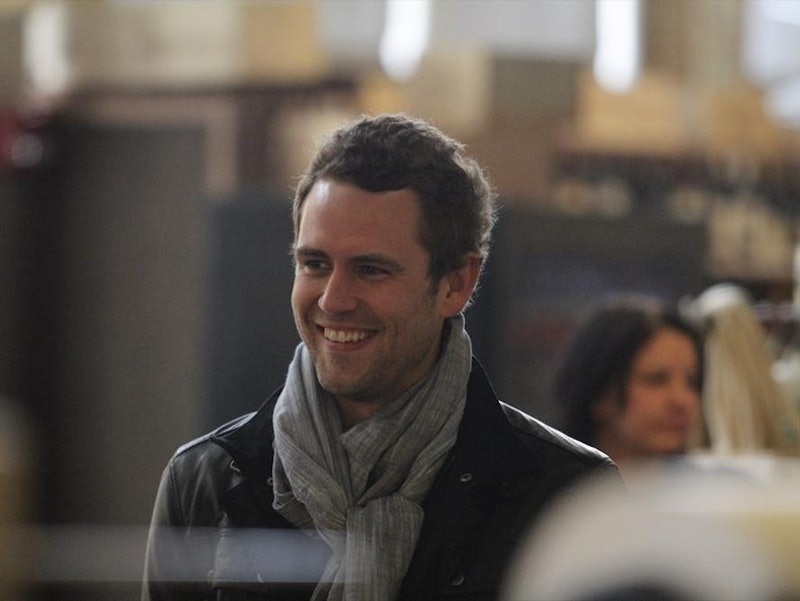 This season of The Bachelorette has plenty of drama already, and now there's one more guy to add to it. Nick Viall returned to The Bachelorette on Monday to throw his hat in the "I Wanna Marry Kaitlyn" ring. In case you don't remember, Nick was a contestant on Andi Dorfman's season who took up an interest in Kaitlyn when he saw how cool she was on The Bachelor. (Same, Nick.) So, on Monday night, while Kaitlyn and the guys were New York, Nick showed up to see Kaitlyn at her group date. But he clearly wanted more than just see the guys rap battle; he wanted to ask for a second chance at love on reality TV.

"The idea that you could potentially get engaged and I wouldn't have met you kinda bugged me," Nick told Kaitlyn after he pulled her off to the side. She seemed giddy over his arrival, but told him she would think about things before agreeing to let him join the competition. "I want to [let him stay] but I know that's so rude to the other guys," Kaitlyn admitted to the camera. But, in the end, she decided to do what was best for her, and let him stay on. (They even kissed!)

In my opinion, Kaitlyn is entirely allowed to bring whoever she wants on the show if she likes them. This show is about the quest to find her husband, after all. But, the guys were less than thrilled that Nick was back. "Are you not confident in what's here?" Shawn B. asked Kaitlyn. He seemed to take Nick's arrival as a personal insult. "If she was 100 percent confident in our connection she wouldn't even consider bringing him here."

I don't blame them for being upset, because the competition just got stiffer. But, also, they shouldn't blame Kaitlyn. The lateness of Nick's arrival was very likely a producer decision to liven up the season by dropping Nick in mid-show. (Joke's on them because the season's been plenty dramatic all on its own.)

Nick and Andi may not have been soulmates, but so far it seems like he and Kaitlyn have a good connection. Plus, they can talk about how weird it is to have been on a TV show, an experience none of the other guys really get quite yet. Basically, as long as Kaitlyn is happy, I don't really care about anything else. If Nick's the guy for her, then best of luck to the both of them, and everyone else can just hush.