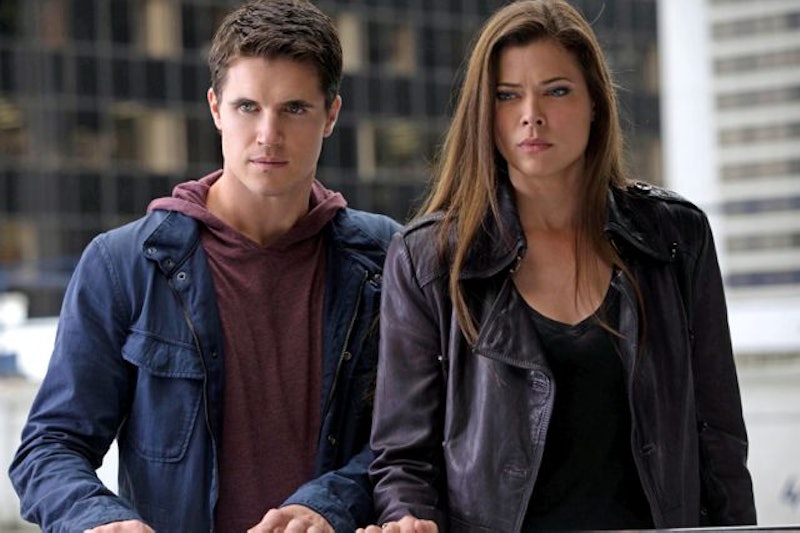 Well it happened: Stephen and Cara (almost definitely) had sex. Go on and rejoice, Team Stephen. This week's episode was called "Sorry For Your Loss," and it triples as a message for runaway of the week, Piper, whose sister dies; TP Russell, whose dad dies; and Cara, whose judgment dies.

I hate to even say it, but for the first time in the series (which, to be fair, is only six episodes in), I didn't completely hate Stephen. Let's be clear: I still mostly hate him. He's still a little annoying and a lot impulsive, but he showed his sexy side tonight and it wasn't terrible. I actually bought the love triangle for the first time ever.

Stephen and Cara get their big moment because John leaves town with Russell, who is determined to attend his father's funeral, but can't be trusted to go alone after last week's debacle above ground. This also sets us up nicely for a flashback to Russell's pre-Tomorrow Person life. He was a piano prodigy with a father who pushed him too hard, leading him to rebel into a life as a card shark when his powers come on. His cheating ways catch up with him, though, and he pisses off the wrong, powerful people who torture his father for information about him while he hides in a closet, watching. Ouch. No wonder he feels like he owes the guy his final respects.

Speaking of hustlers, the runaway of the week, Piper, comes into play when present-day Russell is using his TP powers to cheat bar patrons out of cash at pool. In walks Piper, a seemingly ditzy rich girl with her dad's awesome pool cue, and Russell targets her right away. Of course, being Tomorrow People themselves, he and Stephen catch on right away when she uses TP to cheat and then read her thoughts to confirm it.

In one of the series' most convoluted plot twists to date, Piper turns out to be the long lost baby sis of another TP, Stephen's Ultra partner, Darcy. Going against everything the Tomorrow People stand for, Cara and Stephen decide to connect Piper with Darcy, who decides to turn her sister into Ultra to have her stripped of her powers. In a matter of seconds, Stephen manages to talk her out of the plan, and he and Piper hide (instead of teleporting…?) while Darcy fights the Ultra drones and loses. Of course, when she's dead, they teleport away. It makes a ton of sense. No need to get themselves (or her) out of danger using those magic powers.

In WTF news, Jed, who doesn't appear in the episode at all otherwise, has a Tomorrow Person mistress/lover/girlfriend named Morgan. He scolds her about using her powers, but then gets super turned on when she uses them to magically undress him. Mmm, hypocrisy.

What did you think of tonight's episode of The Tomorrow People?