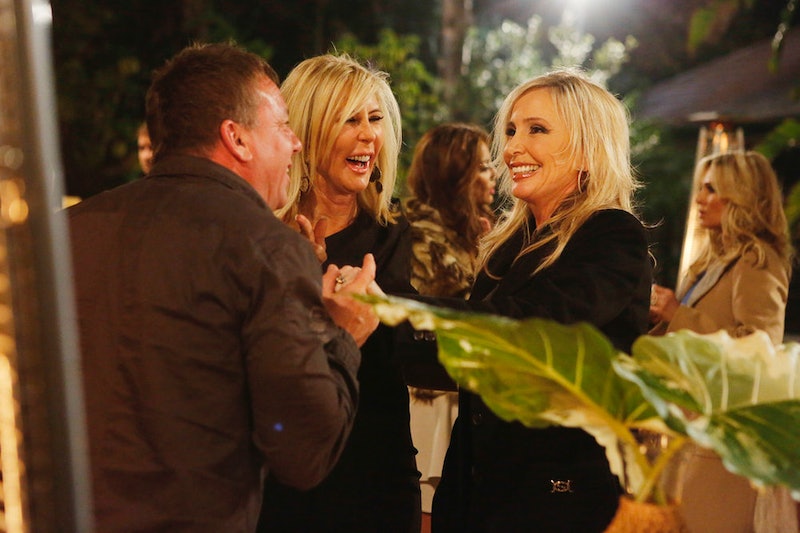 The OG city of the Real Housewives franchise is back for a tenth season, and it is living up to the "real" name. On The Real Housewives of Orange County , Shannon Beador and husband David — who have both been facing marital problems since Shannon's inaugural season in Season 9 — start the season off on a not-so-solid foot. The two are still having marital issues, but this time, it seems even worse than last season. So bad, that on the premiere episode of RHOC, viewers learn that David had an affair during what was supposed to be "the best year of [Shannon's] life."

If this moment in the show is any indication of how "real" this season is going to be, then it's going to be a big season. Unfortunately, I don't know if that translates into a good season, but it will be a big season. During the premiere, Shannon stands by the fact that divorce is not an option and that she'll do whatever it takes to keep her family together.

It was a bit of an ironic introduction into the issues between Shannon and David, when Vicki tells Shannon that it's amazing how great of strides the Beadors have made since last season. Fast forward ten minutes and we learn that post-Season 9 reunion, things were great... but only for a few months. From the looks of it, the Beadors are in an even worse spot at the beginning of this season. And they're going to try and do something about that.

During the episode, the two go to a marriage retreat, where Shannon hopes to solidify David's commitment to their marriage. Shannon seems a little skeptical of David before they start talking to the marriage counselor, and it becomes obvious why very quickly. During the retreat, Shannon opens up to the group — yes, there's another couple that has to have their marriage retreat-ing on Bravo, too — that David had an affair during what was supposed to be the best year of her life.

The details unfold even more. Shannon says she caught David whispering to someone on the phone, and later found hotel receipts from David's affair. He finally owned up to it, but it was sad because Shannon almost seems to put the blame on herself because she was "always bitching."

Shannon's kids did find out, although she never wanted them to know. Judging by the previews, they'll be working on this issue for the entire season. And according to Shannon's Instagram, her and David look to be going strong.