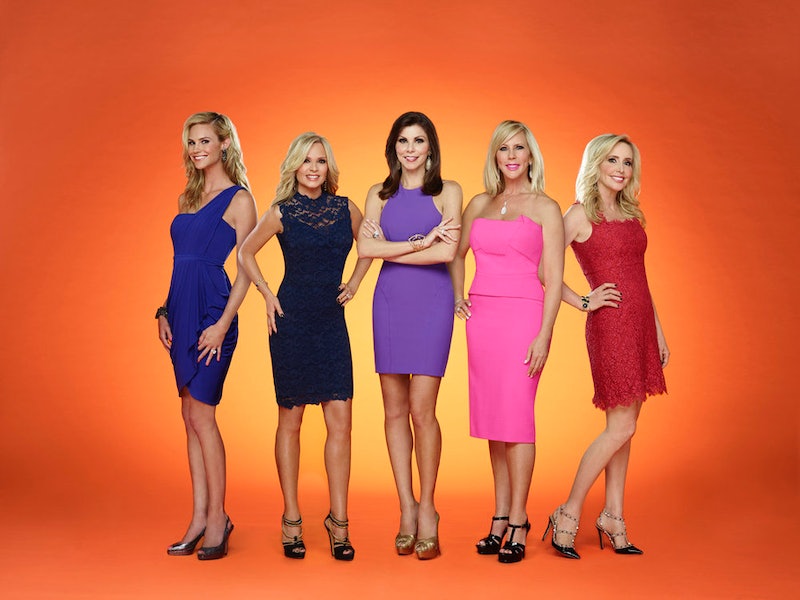 They're baaaaack. It feels like forever since the incredibly dramatic Season 9 of The Real Housewives of Orange Country came to a close — "she kicked me out of her house" — but the OG Housewives are back with a Season 10 of The Real Housewives of Orange County , and it looks very promising. The trailer of Season 10 is nothing short of dramatic; there's yelling, accusations, new housewives, so much finger pointing that I couldn't even keep count in the trailer... Basically everything that makes RHOC the best city the franchise has ever followed.

The housewives from last season return, with a new face. Meghan King Edmonds joins the other women, and she seems like she knows how to make an entrance. In the trailer, Meghan is seen saying that Brooks Ayers, Vicki Gunvalson's boyfriend, doesn't have cancer. Now whether that is a product of editing or not, it shows that Meghan is not messing around this season. There are also many other crazy things that we can expect from this season of Real Housewives of Orange County. Like, what the hell is up with Shannon "dying" in the trailer? Here are six crazy things we can expect to see on Orange County.

1. Brooks Has Cancer, And Some Of The Housewives Don't Believe Him

This is surely going to be a huge scandal during the season (which is sad, because it's no doubt a very trying time for Brooks and Vicki). In the trailer, it is revealed that Brooks has cancer, but Meghan doesn't seem to think so, which will surely get the other women talking about whether or not he does or doesn't have the disease. I've got to say, accusing someone of faking cancer is a pretty bold (and potentially ugly) move.

2. Vicki Compares Herself To Jesus

"I'm being nailed to the cross like Jesus was," Vicki says in the promo. I can only assume that means that Vicki is going to be taking the defense this season (maybe for the first item on this list).

Tamra's son, Ryan, welcomes his daughter to the world, and Tamra is there to become one of the hottest grandmas ever. She also deals with supporting Ryan, his fiancee, and his daughter, which seems to create a little tension between Tamra and Eddie (who believes he shouldn't support an adult man and his family).

Shannon and her husband David went through a ton of marital issues last season (on camera), and it looks like it isn't going to end with Season 9. The two attend a couples retreat, in hopes of smoothing over any hiccups their marriage is facing. There, David has to eulogize Shannon as she lays in her grave, which is seriously only something that would happen on a Housewives franchise.

5. Vicki Deals With A Death

Sadly, Brooks' cancer isn't the only thing Vicki will be dealing with this season. In the trailer for the show, Vicki is shown receiving a phone call in which she responds by collapsing to the floor sobbing. It's truly heartbreaking. The reason behind Vicki's reaction is that she learned that her mother had passed away.

Boring new housewife, she is not. Meghan almost immediately makes an enemy with Vicki Gunvalson this season, which is risky because Vicki has been on the show since Day One. Meghan even calls Vicki "an old woman who's pissed off and bitter," which are Real Housewives Fighting Words and definitely not going to make Meghan a friend of Vicki.

Of course, all of these things are just tastes of the crazy things that will happen this season, but what better way to celebrate ten years in Orange County than with a ton of drama?