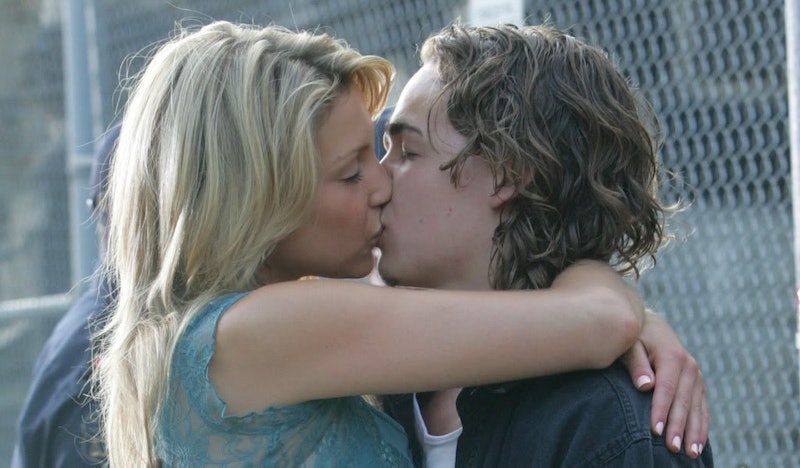 Degrassi fans rejoice! Just when we thought we had seen the last of our favorite Canadian series, it comes back kicking for more. On Tuesday, it was revealed that Netflix had picked up Degrassi with a brand new title, Degrassi: Next Class, focusing on Generation Z and ongoing plots dealing with body image and the effect of social media. While we have to wait until January 2016 to see the final product, if I know anything about Degrassi, it's sure to be filled with even more drama, more gossip and certainly more pairings.

Honestly, after all the controversial topics and heightened drama on the show, the couples were one of the best parts of Degrassi. And, after 14 seasons, you can bet almost everyone dated everyone. But we all had our favorites — our OTPs before that was even a thing. Only Degrassi could make us 'ship the most unlikely couple, and then make us cry uncontrollably when they broke up. Seriously, the new season has a lot to live up to because this show was intense.

Let's take a stroll down memory lane and remember some of the most iconic Degrassi couples to ever hit the show.

This was one of those "didn't know we liked it until we saw them together" pairings, because Jay and Manny surprised us all. They made each other better people and were even engaged at one point. Since they left the show still dating, they are technically endgame.

In the beginning, these two were the "it" couple of Degrassi, and they were actually the first couple introduced in the series. But, sadly differences, tore them apart each time.

These two started off as friends, but eventually decided to be something more. Although they had a rocky start at first, they developed an amazing bond. Hence why we were all heartbroken when they finally ended as just friends.

While I must admit I was more of a Darcy and Spinner 'shipper myself, I can still appreciate the relationship between her and Peter. I mean, come on, he helped her cope with one of the biggest trials of her life.

This is another one of those unexpected relationships that fans began to love. Their time together was definitely a roller coaster of emotions as they went from friends, to hating each other, to a full on romance, and then back again.

Even though there was some major drama between these two for most of their relationship, there was just something about their differences that made us want them together even more.

While I hated Bianca at first for splitting up Drew and Ali, I eventually began to love this relationship. They truly made each other better people. And all of that gang drama that happened, OMG.

Becky was hyper-religious and Adam was transgender, which made getting this romance off the ground a very controversial decision for Becky at first. When they finally worked things out though, Degrassi did the worst thing possible by killing Adam off in a texting and driving plot.

Ah, I get excited just thinking about this relationship. It was the typical alpha girl meets player scenario, but I couldn't help but ship them. Even though they broke up on the show, I still have hope that these two got back together when they both attended Yale.

Even though the Craig-Manny-Ashley love triangle was one for the books, the real OTP here was Craig and Ellie. It may have taken him forever to see it, but, when the two finally shared a kiss in LAX airport, hearts swooned around the world.

Even after their countless breakups, we all knew deep down in our hearts that these two were meant for each other. BRB, still trying to forget that JT's tragic death ever happened.

These two were easily one of the most loved Degrassi couples of all time. They made it through Emma's frizzy hair days and even Sean's time in jail, so it makes no sense that these two weren't endgame.

OK, this has got to be my favorite 'ship on the show, and I'm sure many others would agree. When Emma and Sean finally exited the show, these two became the new "it" couple. They refer to their relationship as a Romeo and Juliet romance, which is clearly toxic in itself. These two have had many trials, but now they're expecting a child together.

These two started off as friends (he was dating her best friend), but it eventually turned into something more. Even though they're not in a relationship, these two share a very special bond. And, since they are both returning for the revamped series, maybe this time they can get it right.