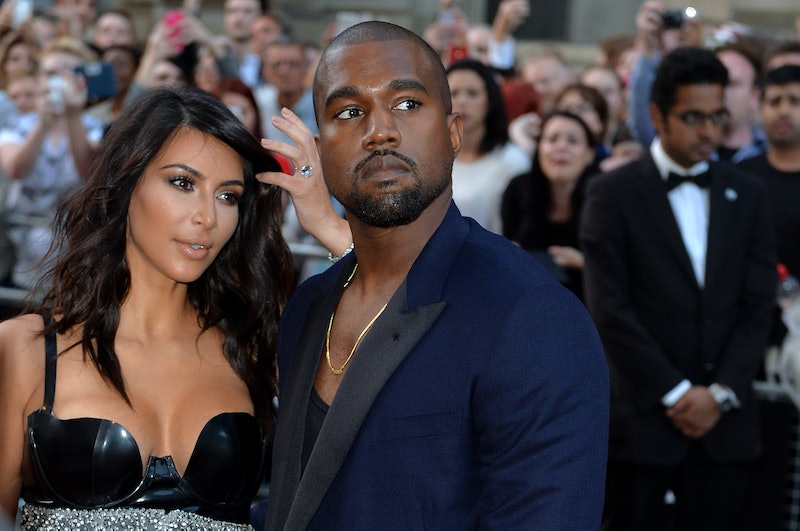 UPDATE: On Wednesday morning, Kim Kardashian did as she does best and took to Twitter to slam the rumors. According to her, Kimye is not having twins, nor have they revealed the sex of their baby to anyone. And, yes, she is carrying the baby herself.

Let the rumors begin in earnest. Of course, they never really stopped swirling about everybody's favorite couple, but, now that Baby Watch is an official go, the rumors are getting even more interesting. According to US Weekly, multiple sources are confirming that Kim Kardashian and Kanye West are having a boy — so it's a good thing South West is a unisex name. OK, so the joke that the second Kimye baby will be named South West is played out, and Kimye themselves denied that they were even considering South as a name according to TMZ, but it had to be said. Neither Kardashian nor Kanye have confirmed officially what the gender of their second child will be, but, if it is a boy, then they'll have the full family set.

"Kanye loves Nori more than anything, but to make his world complete he wanted a little boy, an heir," says a source in the US Weekly article. "He's overjoyed!" I'm already seeing a pretty huge problem with that quote, in that it implies that North West isn't an heir to West's empire — do people still say heirs to the empire? — because she's a girl, which quite frankly makes no sense. You only need to see a single picture of Kimye with North to see that it is absolutely true that Kanye loves North to the moon and back. He wrote a song about her, for pete's sake. (Which is why I'm all the more dubious that Kanye needs a son as his heir. I'm pretty sure North already has that on lock.)

All of that aside, I hope that this rumor is true, and that Kimye really are having a boy. Why? Because I am thinking of Willow and Jaden Smith right now, and how the two of them are incredibly talented children of incredibly talented people. Willow and Jaden Smith seem to go out of their way to defy gender norms, and their overlapping talents have resulted in a ton of great music and movies for the world to enjoy, while they have nothing but the utmost love, respect, and support for each other throughout it all. That's what I want to see with North and her little brother or sister. Whatever they end up becoming famous for, even if it's just for being children of Kimye, I want to see that love and support.

Which isn't to say we wouldn't get that if North was getting a little sister, but it's just a simple fact of life that dynamics between a brother and a sister are different than dynamics between two siblings of the same gender. Will the Kimye boy have his father's ego or his mother's sense of humor? Will he come out more like North or more like Mason Disick? Will they name the baby Royal or King and make Scott Disick super jealous? The world may never know. Until Kimye confirm for themselves that they're having a baby boy, I'm going to remain skeptical, but, if they are, I'm already really excited for them — if only because their fashion options for the children have expanded.