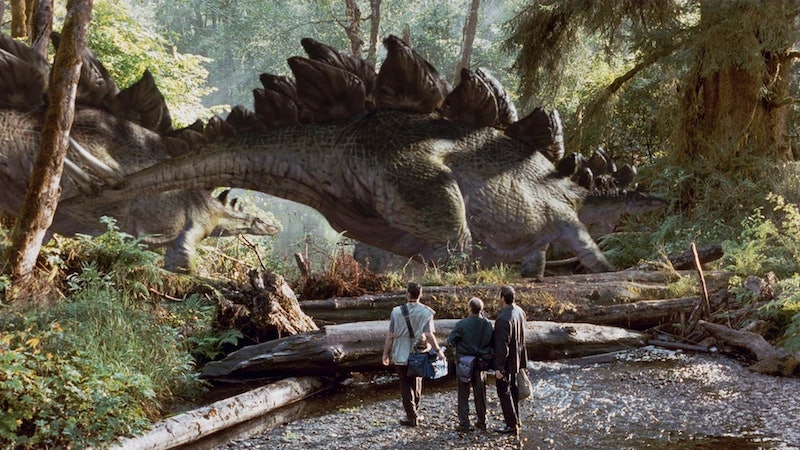 For many fans of the Jurassic Park franchise, the 14-year wait between the third movie and this week's Jurassic World was nothing less than torture. For others, though, they rationalized that having such a long period of time between films was actually more of a blessing; by the time the fourth movie arrived, it'd be way cooler than anything filmmakers could've done if they'd decided to get it done years earlier. It is 2015, after all, and special effects are better than ever; every fight, explosion, and prehistoric creature is in tip-top shape. But are the Jurassic World dinosaurs all CGI, the product of computers and advanced technology? After all, some of the earlier films' villains were simply animatronic creations, certainly lifelike but not computer-made. Did Jurassic World follow suit, or did it come up with some other way of making its dinosaurs even scarier than the originals?

According to director Colin Trevverow, the technology used to make the new film's dinosaurs was a mix of current advanced and the techniques perfected back in the '90s. In an interview with Empire, he revealed that the same company, Legacy Effects, that worked on the first three Jurassic Park films had been hired for World, and that they would be tasked with creating animatronic dinosaurs, just like in the first three movies (viewers of World can see the results in the movie's scarily lifelike raptors). Yet CGI was also utilized extensively, with SlashFilm reporting that Jurassic Park 's visual effects supervisor returned to create computer-generated dinosaurs. To do this, performance capture — think Andy Serkis as Lord of the Rings' Gollum — was used to make the creatures' movements (particularly the T-Rex's) as realistic and detailed as possible.

Pretty cool, right? Clearly, technology's come a long way in the last few decades, and reviews of World are hailing the film's special effects, both the CGI-created creatures and those built through animatronics. Just look at how a dinosaur from Jurassic World:

Compares to one from 1993's Jurassic Park (not that these were too shabby):

In other words: if you thought the film's villains were scary back then, get ready to be absolutely terrified by what you see in Jurassic World. All in good fun, of course — what's a dinosaur movie without a few pee-your-pants moments?