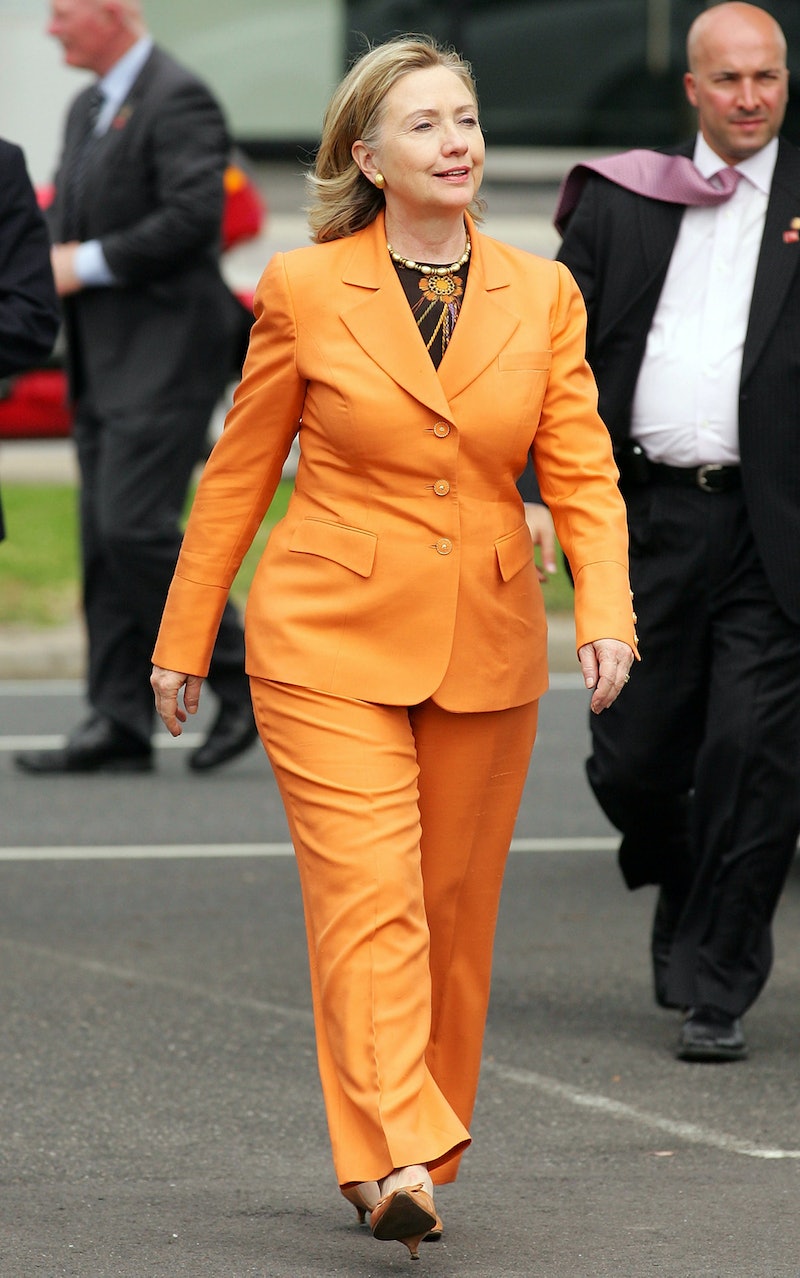 Hillary Clinton brought us a fabulous first Instagram picture early on Wednesday, and has already bestowed us with a second photographic gem via her Insta account. For being brand new to the photo-sharing platform, Clinton is already pretty great at Instagram, and is expertly demonstrating yet again that she is going to do her thing. Throughout her presidential bid so far, we've been able to see time and time again that Clinton is concerned with getting things done, and is not letting traditional political symbols dictate how she runs her campaign.

In her second shared photo ever on Insta, Clinton is shown sitting in front of a video camera in a pink suit, apparently recording a campaign ad or other TV appearance, looking calm and poised. Because her first photo was a bit of a commentary on the chatter always following her clothing choices, it seems fair to point out that Clinton's choice of apparel in this photo is telling, also. Wearing pink, Clinton is embracing her femininity and not giving a crap that she might get flack for seeming "girly." I think she knows that being a woman is great, and there is nothing wrong with embracing pink as a politician. Haters to the left.

Or haters to the right? Clinton's campaign logo shows a variety of H's with different colors and patterns, and an arrow pointing to the right serving as the dash in the letter. The first of these logos showed the arrow (gasp!) in red. While I took this whole image to mean something about moving forward and making progress as a nation, some have criticized the logo for implying that Clinton harbors conservative values. True, the Republican Party is called "the right" of American politics, and being an incredibly intelligent and savvy person, Clinton and her team must have thought about this before green-lighting the logo. Clinton wants us to know that her priority is progress in politics, even if that means ruffling some feathers over arrow orientation in her campaign materials.

While some like to stir the pot and position Clinton as an unlikable or controversial figure, she has consistently been one of America's most admirable women, probably because she isn't afraid to act in accordance with her values, proudly own her womanhood, and generally displays excellent badass behavior.

Clinton deserves her due for blowing off unwarranted or superfluous criticisms that ultimately have nothing to do with her politics. Politicians live under incredible public scrutiny, and to some extent this is fine. We want to really know our politicians and hold them accountable for their actions and values. But when it comes down to what she feels is best for her as a person and a politician representing the American people, Hillary is just going to do Hillary.