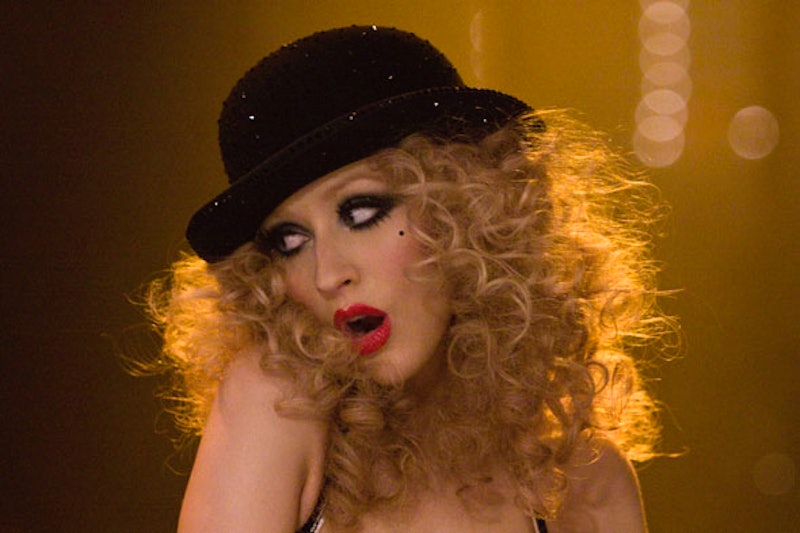 It's a passion, and emotion, and a fashion, and a moderately amusing 2010 movie. It's Burlesque, and, apart from marking Christina Aguilera's acting debut, it's a sparkly star-studded film that features everyone from Cher to Kristen Bell to Stanley Tucci. You'd think that the film, with it's rich Devil Wears Prada-meets-Coyote Ugly undertones would be a smash hit, and it would... if it wasn't so cheesy at times. And while Glitter it is not, it's definitely worth rehashing the clichés upon clichés.

You've heard this story before: Small town Iowa girl Ali goes to LA dreaming of musical stardom. She instantaneously gets a job at a flashy, exciting burlesque club, with wise owner Tess becoming her mentor, beautiful alcoholic Nikki becoming her rival, and engaged-to-some-rando bartender Jack becoming her TOTES PLATONIC friend slash roommate. As Ali continues to dazzle everyone, get courted by millionaires, and get everything she wanted, Jack follows her around with the same look of longing... and, oh yeah, the club falters financially. Will those two crazy kids make it work? Will the club get saved miraculously at the last minute?

Anyway, without any more delay, here's a chronological list of all the silliness that comes with Burlesque.

1. The film opens in every movie version of every small town ever.

Where — aside from the perky, young go-getter fronting this movie — hope goes to die.

2. Ali quits her job, and then decides to sing alone in her former place of employment, like we all do when we resign.

Especially after stealing money from the register.

3. We cut to the burlesque stars doing their sexiest dance move, "The Human Centipede."

4. Ali gets herself a one-way ticket to L.A. taking nothing but few hundred dollars and a suitcase full of dreams.

In real life, this story generally does not end well — but yeah, OK, follow your dreams, girl.

5. Ali is looking through newspaper listings, because apparently they didn't have computers in Iowa.

6. Then Ali, with no resume, no formal experience, and nothing but said suitcase full of dreams, asks for a job at a prestigious burlesque club.

7. Ali, due to her unacceptable lack of computer, is forced to paw through books on the subject.

8. Kristen Bell sings erotically about a trip to the dentist.

Which is several layers of unnerving if you're a Veronica Mars fan.

9. Then Sandy Cohen tries to negotiate a business deal about selling the burlesque club, and it doesn't involve an unlimited stream of bagels.

I don't want to live in this world anymore.

10. Ali's hotel room is broken into and she's all shocked.

Because she's never watched Coyote Ugly or Gone Girl or the other 9000 films that are like this.

"...well can you maybe keep it down, because I'm trying to sleep."

12. Ali is handed a Swarovski crystal bustier and a golden gun.

And Tess is wondering why the club is having financial issues.

13. Ali decides to touch up her eyeliner before she turns it in for the night.

"There, are you happy, I hope that's a good look for your big plans of passing out on a ratty couch."

14. Jack is all angry because Ali used his one towel.

Meanwhile, if I were him, I'd be angry that I only owned one towel.

16. Everyone's all psyched and totally not threatened about Ali becoming the lead star of the club after working for all of five minutes.

19. No snark: Aguilera's wig is just having a really good hair day here.

Because those Nine West pumps are SO last season?

21. When Tess takes out a crow bar and smashes Nikki's car.

After Nikki says she slept with Tess's husband, so... there's that. Still, why is a crowbar something Tess has on hand?

23. When Jack tries to seduce Ali with these pajamas.

24. When Jack tries to seduce Ali with Famous Amos cookies.

Better, but I only put out for Oreos.

25. When Jack and Ali ~make love~, and for some reason it just looks like Ali singing in a tacky green dress.

26. Then JACK'S FIANCEE conveniently comes home while they're post-coital and she's all like, "WTF?"

The only part of this movie that makes sense.

She takes him back anyway.