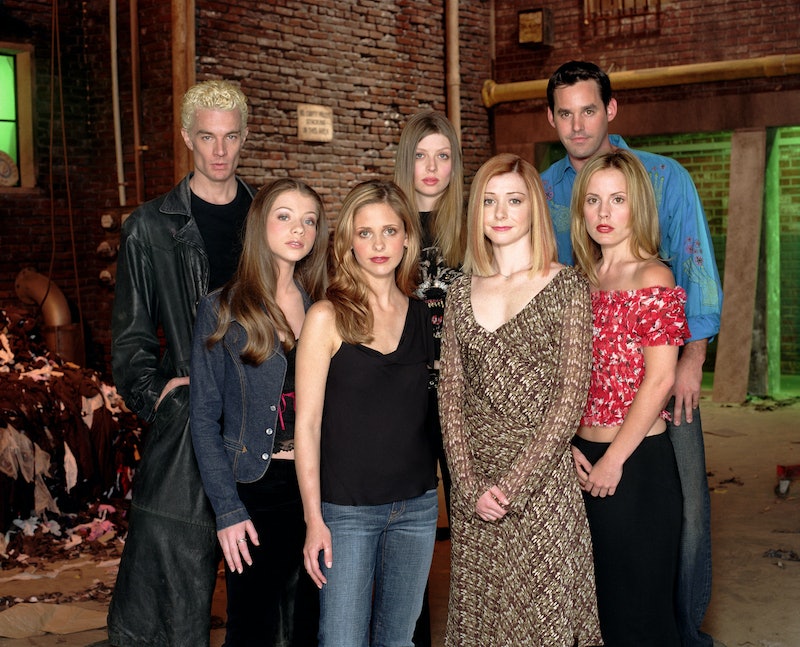 In case you missed this week's big '90s nostalgia news, here it is: In the most amazing announcement ever, ABC Family revealed they will begin airing Buffy the Vampire Slayer and Dawson's Creek episode reruns. This is not only amazing news for those who remember the shows when they originally aired, but for today's younger generation as well: Kids who didn't have access to these shows during their first airing back in the '90s are being granted the opportunity to catch up on two of TV's most influential shows ever. Personally — thoughDawson's Creek is great — I'm most excited about Buffy, because Buffy is and always will be a monumental TV accomplishment, and one of the first quality shows I ever fell in love with. The sparkling wit, the intricate storylines, and most importantly of all, those flawlessly flawed Joss Whedon characters totally stole my heart.

I could try to rank the Buffy characters by their degrees of awesomeness, but, the truth is, every Buffy character was amazing in their own way. I have a favorite though, and I am willing to bet you do too. Because Buffy was such a personal show for so many people, it was easy to get attached to one character — Buffy, Willow, Xander, and the rest of the Scooby Gang each had their own allure.

For that reason, your favorite character says a lot about you — considering Whedon imbued all of his characters with such unique world views, there's no way it doesn't. So, that said, let's dive in and see what your fave can tell you about your personality.

The Chosen One herself, Buffy was a slayer, a hero, and cookie dough. She never met a battle she couldn't face, even when it meant she had to sacrifice her boyfriend to save the world — or her own life. If Buffy is your favorite, then you probably derive strength from her character, and you aspire to be as powerful and brave as Buffy is in your everyday life. Maybe you even feel there is a great deal of Buffy in you because life has always been a struggle. Just like the slayer, though, you keep fighting — no matter how hard life gets.

Throughout seven seasons Willow transformed from a shy high schooler into a super powerful witch. If Willow is your favorite, then you too went through a major transformation in life. Willow is proof that who someone is in high school does not define them: She kept growing and learning from her achievements and mistakes until she became almost transcendent — and you aspire to do the same. She's a constant reminder that it is OK to be who you are and you love her for it.

Like Xander, you are so human it hurts sometimes. You wear your heart on your sleeve, you make mistakes, and you always try to help your friends. Xander often felt overlooked and under-appreciated, so, as a result, his anxieties speak to you on a deeper level. He was always big hero though — and deep down you know you are one too.

Wise and competent, like Giles you are the brightest member of your friend group. You have always been considered an old soul by your besties, but you may have a wild past — or maybe you have a wild side you try to repress. Either way, you are way more complicated than people think you are. Just because you love book learning and a good cup of tea does not mean you're not a badass!

Angel was a broody vampire with a heart of gold... unless he was on one of his Angelus-fueled murdering rampages. Angel fans are romantics at heart. You believe in true love, but you are also just enough of a realist to understand life is full of unhappy endings. Like Angel, you can be contemplative and ready to rush into action at a moment's notice.

Above all else, you are realistic about the state of the world at the large. Life is a struggle and you see no reason to pretend otherwise. Faith believed in having fun and fighting hard, but she was also easily hurt. You share her outward strength and her inner softness. She is a constant reminder that you can save the world without being all sunshine and light, and you love her for it.

Personally, you think everyone needs to chill out and learn to appreciate life. Sure, there's a lot of bad things happening, but you know better than anyone that dwelling on a problem does not make it go away. Cordy knew how to have fun and get stuff done — you're probably similar.

You have a bit of a dark side and a sense of humor to match. Spike went through a lot of phases, but he was consistently the show's resident bad boy vamp — even when he was a good guy. You don't believe people are irredeemable, and when you feel passionately about something, you drop your apathetic demeanor because you know some things are worth fighting for. Also, chances are you love sarcasm and the color black.

Everyone loved Tara, but if she is your very favorite character, you feel a special kinship with her. Tara was unique in every way: She had a sense of humor not everyone understood, she was gentle of heart, and full of kindness. She was also extremely shy and lacking in self-confidence. You likely love Tara because she reflected you in a way a TV character had never reflected you before, and proved that shyness is not someone's defining quality — the more she opened up, the more it was clear she had a rich, internal life. The same is true for you, and you will always love her for giving you the courage to express yourself.

Oz appreciated the weird and wonderful peculiarities of life. From his affection for a zombie cat to his laconic attitude in the face of multiple apocalypses, Oz was a special guy. If he is your favorite, then you value the unusual above all else. To you, life is one long adventure that you are in no hurry to finish.

First of all, I think we should be friends. Secondly, you love an underdog. I'm going to guess you are the youngest member of your family, and know all too well what it feels like to be dismissed as whiny or not capable. You saw the potential in Dawn, just as you see the potential in yourself. Like Dawn, you don't like being underestimated — but in the end, it just gives you more reasons to prove yourself.

Anya is such an easy character to love because all she really wants out of life is to be loved and valued. Not only did you understand her desires on a deep level, but you also relate to her struggle to be a "normal" human. Your love of Anya proves you know normal is overrated, and you would much rather march to the beat of your own invisible marching band.

It's the abs, isn't it? No? Fine. If Riley is your favorite, then I am going to wager Captain America is your favorite Avenger, and Superman speaks to you on a deep, personal level. You like your characters to have a strong moral compass, while also being the picture of the upstanding guy. You believe there is a clear difference between good and evil, and you always root for the good guys.

More like this
Somebody Convince Soccer Mommy To Make A Metal Album
By Samantha Leach
'Friends' Creator Marta Kauffman Opened Up About Misgendering A Guest Character
By Grace Wehniainen
Jesse Tyler Ferguson Had A Funny Run-In With A Fellow ‘Modern Family’ Alum
By Grace Wehniainen
“The Door Is Always Open” For Another 'Breaking Bad' Spin-Off, Says AMC Boss
By El Hunt
Get Even More From Bustle — Sign Up For The Newsletter