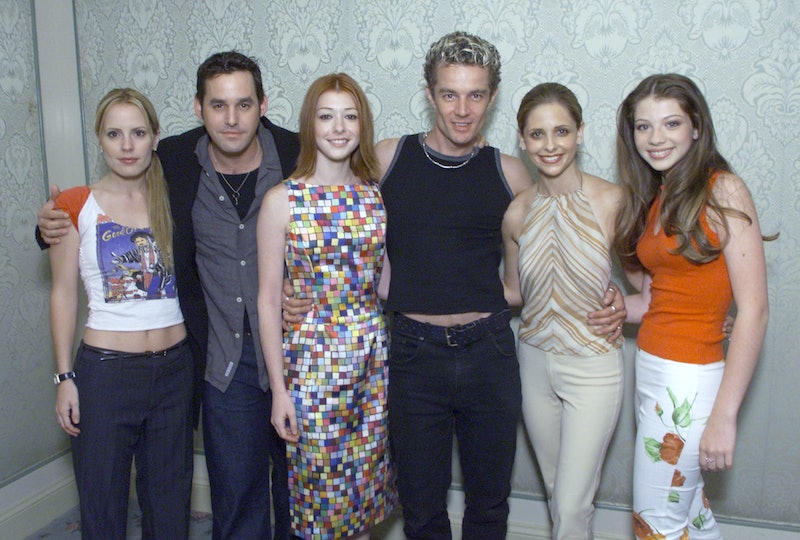 It's official: '90s nostalgia is in full swing! With a Full House reboot in the works, it's not surprising that two of my favorite shows from yesteryear, Dawson's Creek and Buffy the Vampire Slayer , are returning to TV in re-run form on ABC Family. I'm always harboring a secret hope that the Capeside gang will reunite, but, in the meantime, this is the perfect opportunity for Generation Z to bask in the glory of the pop culture fixtures. (Hey, it's not their fault that the most Gen Z-ers weren't born until after these shows premiered!)

Dawson's Creek, which ran from 1998 — 2003, and Buffy, which ran from 1997 — 2003, were defining shows for their viewers. Not only did fans grow up with the characters, but both shows portrayed confident, witty teens that we could aspire to be like. Even though their respective series finales premiered more than 10 years ago, both of these shows are still extremely relevant to teens today. Since they'll both kick off their re-runs with the pilot episodes, there's no excuse not to watch them and immerse yourself in the glory of '90s adolescence drama.

Still on the fence? Here are seven reasons why you need to tune in.

1. The Boy-Falling-for-the-Unattainable-Girl-Next-Store Plotline Never Gets Old

2. The Feminism Movement Is Stronger Than Ever

But Buffy has been kicking butt since the mid-'90s.

From Buffy's tank tops to Jen's slip dresses, these shows are like a Pinterest board come to life.

4. Love Triangles Don't Get Better Than These

Before there was #TeamEdward and #TeamJacob, fans agonized over whether Joey would choose Dawson or Pacey.

5. These Actors Went on to Do Amazing Things

6. Everyone Loves a Good Coming of Age Story

Whether it's Buffy growing into her own, or the gang exploring life beyond the creek, I guarantee heartstrings will be tugged.

7. The Dawson Crying Meme Will Make So Much More Sense Now

Trust me, it's so much better when you've watched six seasons of intense drama.