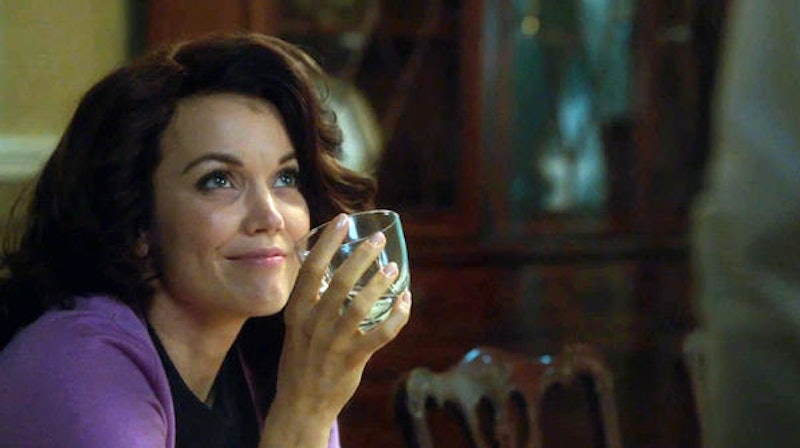 Mellie Grant is a political animal, and it is fantastic. If there is one thing Shonda Rhimes has proven herself adept at in both Scandal and Grey's Anatomy, it is in writing the scorned wife to be somehow the most compelling, scene-stealing character on these shows. She did it well with setting up Addison Montgomery in Grey's season 2, and she's made it a bonafide art with First Lady Mellie Grant. Tonight's episode of Scandal shows us flashbacks to a younger, happier Mellie — and something we've never seen before, which is Mellie with a devoted husband.

We've discussed our Mellie Grant obsession before, of course. But our love for this rabid, complex, brilliant woman knows no bounds, and so we're going to keep talking about her — this time with a collection of some of our favorite Mellie moments:

When She Leaves Fitz

We gotta say, as much as we feel for his massively fucked up life and as much as his puppy-dog eyes can sometimes get to us, we really love it when people leave Fitz. The dude kinda deserves it, y'know? And sure, it didn't last, and it majorly messed stuff up for some other characters we love for a while. But at least she did it.

The below video actually has both of Fitz's ladies leaving him, which makes it all the more sweet.

But We Also Love Their Genuinely Sweet Moments Together

They are few and far between, those sweet moments, but they count. This show is an interesting look at a marriage that has stopped being a love connection but that continues to be a business arrangement — and the ways in which commitment can get truly complicated.

When She Faked a Miscarriage

Sure, it's not for the faint of heart to stand up and lie to the faces of the entire American populace, but Mellie's done it a zillion times. Mellie telling the American people she'd suffered a miscarriage? As her way of explaining away the distance they'd been reading into her marriage and a way to win sympathy votes? That was the first (that we saw), and it was a pitch-perfect showcase of the fact that Mellie's political prowess far outweighs her husband's.

"The upsetting thing about being as educated as I am and as intelligent as I am is that being First Lady is profoundly boring," she tells her husband as she confronts him on (another) questionable move of his. "What did you call me? Ornamental? Not functional? I am a rose dying on a vine here — give me a war to run or the CIA or SOMETHING."

Mellie running the CIA would be so terrifying and so, so glorious.

When She Schooled Fitz On What He Was Becoming

Mmmm, schooled Fitz is our favorite Fitz. This scene is also pretty sweet in that it's in reference to their relationship to their children who we've never even seen.

This is the most legendary scene Mellie's had all season, and Bellamy Young makes practically every scene she's in notable and electric, so that's saying something. She confesses to her husband that she can't wish Olivia Pope ill (or rather, dead), because she knows he'd spend the rest of his life pining after her and she'd have lost forever. We don't ever condone her calling Olivia a whore, but damn was this a great character moment.

What is harder for a character like Mellie than to beg for help from the person who she hates most in the world? Pretty much nothing, which is why watching Mellie put aside (and in a way embrace) her history with her husband's mistress in an effort to get said husband a second term as president? That was damn harrowing. She still sneaks in a barb at Olivia, of course, because this is Mellie Grant we're talking about. It's probably one of the best encapsulations of the relationship between these women that the show's ever had.