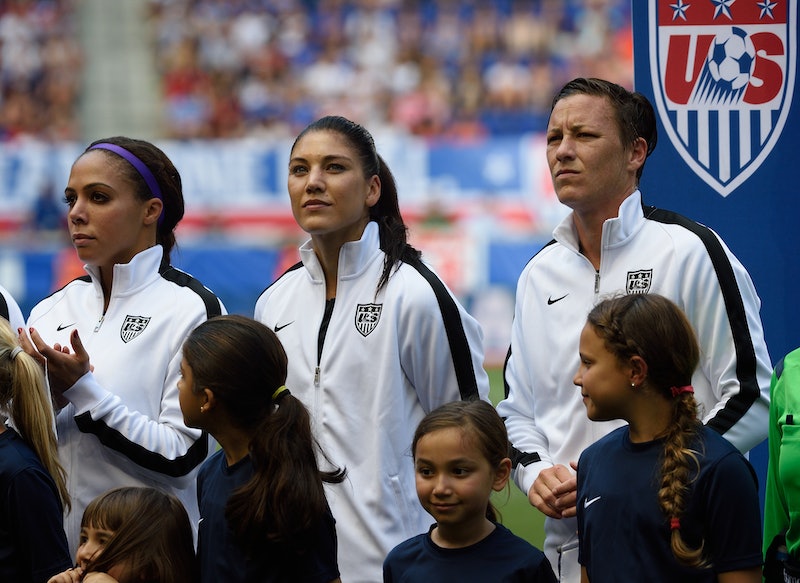 Equal pay for equal work is not a reality in the United States — and it’s no different for female professional soccer players. While you're probably familiar with the fact that American women earn an average of 22 percent less than their male counterparts, you might not be aware that the National Women's Soccer League (NWSL) only pays its players between $6,000 and $30,000 per year, while Major League Soccer (MLS) players earn a minimum salary of $50,000. And while the U.S. Women's National Team (USWNT), who are currently playing in the FIFA Women's World Cup, have subsidized salaries, and some high-profile players have endorsement deals, their salaries are low for professional athletes — making them a serious deterrent to players starting, and staying, in the game.

Just ask Jazmine Reeves, 2014 Rookie of the Year for the NWSL's Boston Breakers, who told The Atlantic she left professional soccer because she was unable to get by on her $11,000 salary.

Not even international glory pays the bills. The women of the USWNT, in a midst of a World Cup they're favored to win, often don't fare much better. Their salaries certainly come nowhere close to those of their male counterparts, despite the fact that the women’s team is far more successful on the international stage: the U.S. women have won two World Cups, but the men haven't even made the semifinals since 1930.

Sydney Leroux, a USWNT starter this World Cup, is a perfect example of wage inequality in soccer. Leroux is estimated to earn a salary between $60,000 and $92,500 a year, including endorsements. Her husband and fellow soccer player Dom Dwyer — a talented, but not internationally competitive, player for Sporting Kansas City in Major League Soccer (MLS) — earned $92,500 last year. Jozy Altidore, a U.S. Men's National Team star who is 25, just like Leroux, will make $6 million this year in MLS — and that's not even including his endorsement deals.

How do we achieve pay equity? To start, FIFA needs to fundamentally change. As the NWSL and women's leagues in other countries struggle to gain a footing, grow their audience, and support their players, FIFA is well-poised to make serious investments in women’s soccer. They just choose not to.

Take, for instance, the prize money paid out to teams in the most recent World Cups. The total payout for the Women’s World Cup this year will be $15 million, while the total for the Men’s World Cup last year was $358 million — more than 20 times as much. When asked about this disparity, FIFA secretary general Jérôme Valcke said, “That's not even a question I will answer because it is nonsense… We are still another 23 World Cups before potentially women should receive the same amount as men.”

FIFA wants women to wait until the year 2107 for potential equal pay. That’s way too long. Women’s soccer is growing across the globe, but it would grow even more with FIFA’s help. Instead, officials disregard the women's game, claiming that it isn't worth investing in, while simultaneously wasting funds on frivolous luxuries. One ex-FIFA official spent a sum of FIFA’s money that exceeded Leroux's annual salary on an apartment for his cats (seriously).

As a non-profit, FIFA’s mission is to “develop football everywhere and for all.” For it to justify a lack of investment in women's soccer, based solely on its inability to make money off the Women’s World Cup, blatantly violates its own mission.

The Women's World Cup might not draw the same attention as the Men's World Cup yet, but if FIFA were to begin spending anywhere near as much on women’s soccer as men’s soccer, national programs would be better able to sustain themselves and their league counterparts. The money FIFA pays to national teams could be used to improve training, facilities, and salaries. National programs could also invest in raising the profile of the women's game through advertising and youth development. Further, FIFA could require national programs to meet certain standards that would help ensure the success and longevity of the sport — including, as noted by Bitch Magazine's Stephanie Yang, "living wages, health care, proper training facilities, equipment, and travel for women's teams."

If FIFA actually prioritized women's soccer, you'd have more competitive women's tournaments with bigger audiences. FIFA’s investment would provide even greater benefit to other countries, which often don’t have a professional league at all, or where players are paid little or nothing for their work. Women's soccer players shouldn't have to wait any longer for fair pay from the very organization that's purpose is to support soccer "for all."

The problem of low pay outside of FIFA — where the sexism isn’t as in-your-face, but is still in play — is harder to solve. Solving the equal pay problem will take more work and investment across the board. We'll have to work to break down assumptions about women’s careers and value as athletes among broadcasters, sports fans, companies like Nike who endorse athletes, and soccer officials themselves — like the assumptions that women simply aren't as good at sports, that they aren't as interesting to watch as male athletes, or that they're not worth investing in because they will leave their careers to raise a family.