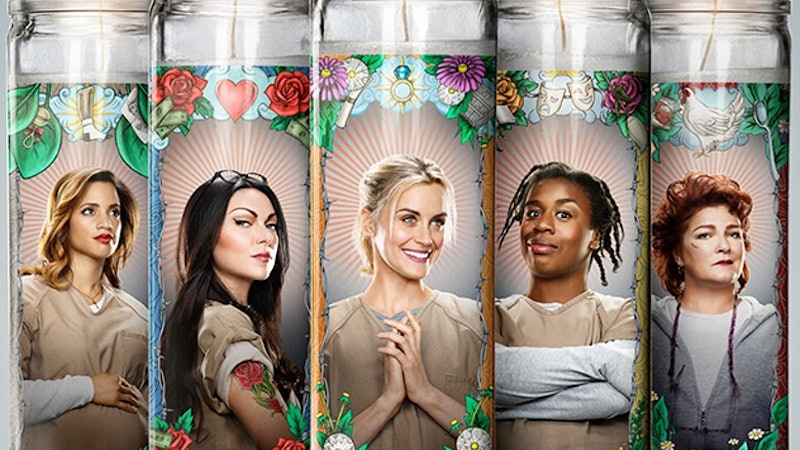 On Friday — so in just a handful of hours, really (!!!!!) — Season 3 of everybody's favorite female-dominated dramedy, Orange Is The New Black , goes live on Netflix. Cancel all your plans, order take-out, and break out the toilet hooch like Poussey, because this season is gonna be good. The trailer is indication enough of that: Alex Vause is back at Litchfield after violating her parole, and we've been promised development with Daya's pregnancy during the coming season.

Orange is the New Black has been a huge phenomenon since its premiere in 2013, giving the world iconic characters like Pennsatucky and Crazy Eyes, and catchphrases like "I threw my pie for you." (Which, seriously, is the most beautiful sacrifice one can make for their love. I dream that someday, someone will get down on one knee and throw their pie for me.)

With such a wide array of characters in such a stressful situation, every OITNB fan has someone they're particularly rooting for. And with so many people in Litchfield, there are characters whose backstories we are just DYING to know (Where did the sweet Poussey go wrong? Crazy Eyes!? What did Red do with the Russian mafia beyond that glorious "Tit Punch"?)

So, is your favorite character Poussey or Taystee? Sophia or Big Boo? Piper or Alex? Whoever it is, choose wisely — here's what your favorite Orange is the New Black character says about you:

You're a smart, strong person, and will probably change the world one day.

You're passionate about your beliefs — sometimes too much so.

You're a fun, funny person who loves to do bits — and people love you for it. You love being the center of attention with your gang, but struggle when it comes to being outside of your element.

You like to be in charge, and don't like to be challenged by anyone else. You are also prone to creative revenge tactics, so no one questions your authority. In other words, you are ***Flawless.

You're smart and sarcastic, and might crack jokes as a defense mechanism — but only because you have trouble really letting people in, emotionally.

You're confident and sarcastic, and very resourceful (especially with a screwdriver). You have some trust issues, and, like Nicky, may comedy to deflect.

You're fun, a good friend, and a hopeless romantic. You can be a bit delusional when it comes to crushes and love — but you always mean well, and you will never stop believing in happy endings.

You're zen and spiritual, but with a dark side. You have overcome some trauma, and you try your best to put it behind you.

You're sweet, sensitive, and a good-natured jokester. You have experience with unrequited love, and cry for how much the unfortunately-named Poussey loves the fortunately-named Taystee. There's also the possibility that you, too, were an army brat stationed in Hohenfels, Bavaria, Germany.

You love both comedy and drama, as Crazy Eyes is the character who can make you laugh the most and who can break your heart the most — often at the same time. You know what it's like to feel like an outsider and are an eccentric with a heart of gold.

You're sexy, seductive, and manipulative with your sex appeal. You can be the reason why someone gets sent to jail — but you'll still get them back in the end, because you're just that magnetic.

You're kinda basic, yes, but you're also proud of it, and that's all that matters.