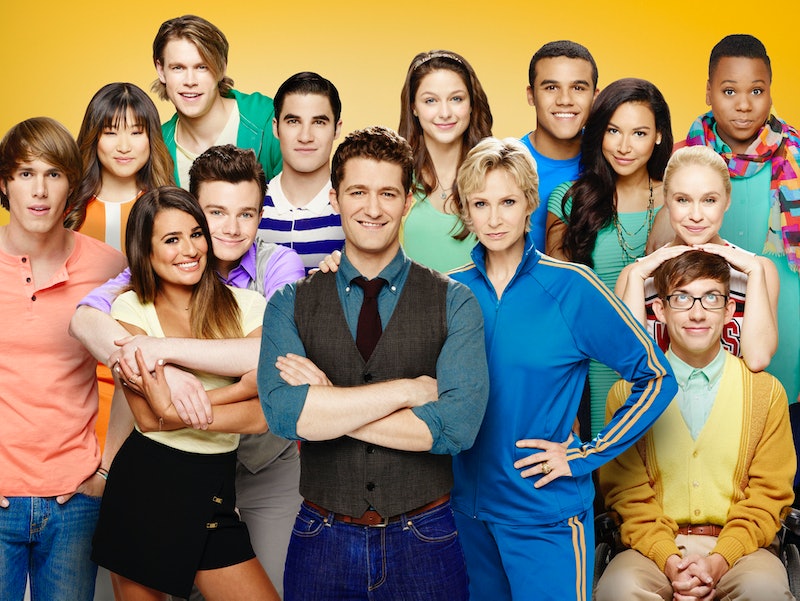 Something terrible is happening. Ryan Murphy's fantastic series American Horror Story might just be turning into Glee. The first sign of trouble was Murphy's reveal of Stevie Nicks' story line on AHS: Coven, but now that we've digested that, the other signs are starting to show. While this realization comes with a feeling of dread, just know that Glee has had seasons where it drove itself to a place where cast photos look more like overhead shots of a Los Angeles high school graduation ceremony. AHS: Coven has only one, so it'll keep itself mostly in check. Still, I now find it impossible not to see the similarities between the two. Sorry, everyone.

If Glee's celebrity guests aren't playing Spanish teachers whose characters are so haphazardly made up, they bring an entire character's history into question (Ricky Martin ousting Mr. Schue because the latter doesn't actually know Spanish), or Vogue (DOT COM) editors who hire Kurt because they like his Tumblr (Sarah Jessica Parker), they're awkwardly showing up playing themselves for no truly justifiable reason (Patti LuPone, Lindsay Lohan, Olivia Newton John, Perez Hilton).

Now, Murphy says her majesty Stevie Nicks will appear on American Horror Story as herself in a non-dream sequence featuring her singing with Misty Day (Lily Rabe). It's a play date from heaven set up by Fiona (Jessica Lange) to encourage the young witches to fight harder to become the Supreme. Yes, because none of this sounds ridiculous or far-fetched. We'll eat it up because we love AHS and Nicks, but come on. This is Glee all over again.

2. None of the Characters Stay Gone

Santana moved away to college. Rachel and Kurt moved to New York. Everyone graduated. Yet, somehow, the show kept everyone around (eventually moving Santana to New York and making it easier on everyone) and gave us new people to learn to care about.

AHS has this problem too, although in the case of the FX show, it's got good reason (see: witchcraft). When Evan Peters' character died, he came back as a Franken-dude. When Emma Roberts' Madison was rolled up in a bloody rug, she too came back from the dead. And we saw Misty Day make the crispified witch Fiona burned at the stake back to life. The difference is that AHS actually needs all of its old characters. On Glee, it's a wonder anything ever gets done with all the people we have to check in on each week.

Like Santana said to Rachel (in so many words) time and again on Glee, the deliciously bratty Madison says to Zoe (Taissa Farmiga), "Do you any clothes that aren't from The Gap?" No, Madison. She's the underdog heroine on a Ryan Murphy series. Of course she doesn't.

4. Cordelia is Emma if She Was a Witch

Her take on witchcraft is that witches should play it safe and favor horticulture over spells and ascensions to power. Emma is timid and shy for most of her time on Glee, and if given the chance to school witches, she'd tell them to stay on the safe side. Plus, both she and Cordelia have terrible taste in men — Mr. Schue and a witch hunter? You can do better, ladies.

5. The Sort of Main Character Is Constantly Chasing Youth

Mr. Schue's constant need to have the glee club think he's cool like he was back when he was doing disco tunes at Nationals might actually be worse than Fiona sucking the life out of some poor doctor and killing Madison to keep from losing her power. Okay, it's not worse, but it is less fun to watch.