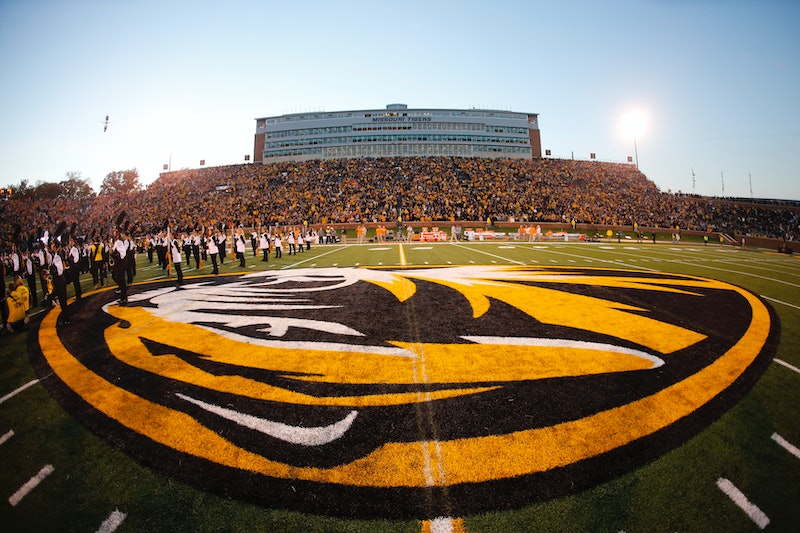 If ever there was an occasion for the side-eye emoji in journalism, now is the time. In an effort to prevent campus sexual assault, the University of Missouri is considering banning female students from fraternity parties as part of a proposal known as "Safety of Women Students In Fraternity Houses." According to Cosmopolitan, the proposal would ban destination formals, hard liquor, and oh yeah, women in frat houses from 10 p.m. to 3 a.m. Thursdays through Saturdays, because clearly women are at fault in campus sexual assault.

Ted Hellman, a spokesperson for the consortium, was quick to remind everyone that these are merely proposals, and nothing is set in stone yet. "No action has been taken. ... We are very, very early in the process, and the things you are seeing are coming from a document over two months old and dated information," he told the Columbia Daily Tribune. Similarly, a spokesperson for the University of Missouri told The Huffington Post that "the proposed policies ... will be discussed at an upcoming summit with MU Chancellor R. Bowen Loftin and student leaders."

Needless to say, the proposed policy hasn't gone unchallenged. One of the suggestions originally included mandatory drug testing for fraternity and sorority members, but it drew so much ire from students that it was dropped, according to the Daily Tribune. The ban on late-night visits to fraternity houses will still be considered. Students claim that the MU Fraternity Alumni Consortium, the group of Greek alumni who created the proposal, lacks representation from the female students it claims to support.

The Panhellenic Association wrote in a letter to chancellor R. Bowen Loftin that the proposal "was written by men who are not entrenched in daily campus, fraternity and sorority life." Furthermore, the association claims that "by restricting women under the guise of 'safety,' this policy lends itself to the notion that women cannot make choices for themselves."

There's no denying that the statistics for sexual assault on college campuses are terrifying; although statistics vary from study to study, researchers have found that anywhere from 11 to 20 percent of women will experience attempted or completed rape during her time at college. Moreover, if women report the crime, their assailants frequently receive nothing more than a slap on the wrist. It's horrifying, and college campuses should make every effort to change the culture surrounding sexual assault on campus.

However, banning women from fraternity houses is hardly the way to do so. It places responsibility on the woman to not get raped — if a student ignores the ban and is raped, she would almost certainly receive censure for breaking the rules, taking the focus off of her assailant and placing the blame on the victim. Instead of telling women not to get raped, why don't we teach men not to rape? It's an old argument by now, but clearly, it bears repeating.Images: gifs-for-the-masses/Tumblr

More like this
The Families Of Grenfell Tower Are Still Waiting For Justice, Five Years On
By Bustle UK
34 Quotes That'll Inspire You On Juneteenth & Beyond
By Syeda Khaula Saad and Siena Gagliano
How To Fight For Reproductive Rights, Based On How Much Time You Have
By Courtney Young
5 Concrete Ways To Take Action Against The Rwanda Deportation Plan
By Rachel Mantock
Get Even More From Bustle — Sign Up For The Newsletter