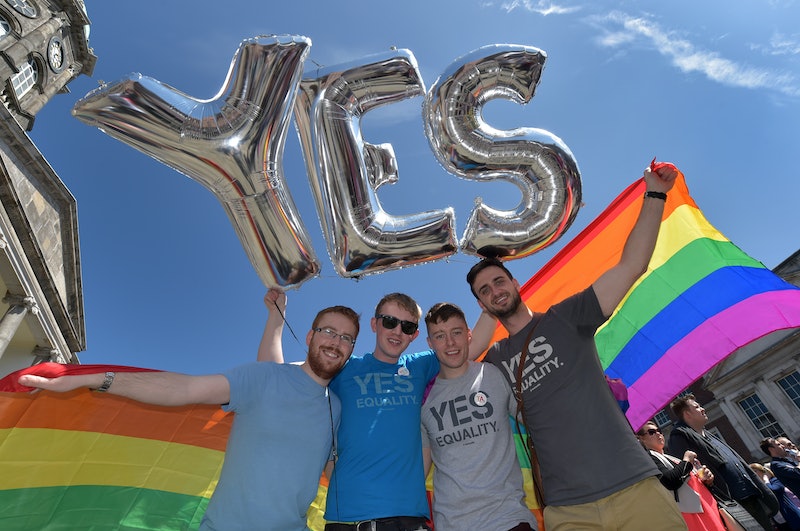 The Supreme Court has officially just legalized same-sex marriage nationwide, so it is time to celebrate! It's a beautiful and historic day — and it's not without precedent, either. There have been numerous other times in the history of the Supreme Court when love has won out; so, while we're all celebrating this newest addition to the list, let's take a look back at some of our previous victories, too.

The Supreme Court has a checkered history when it comes to guaranteeing equality. There have been a number of cases when the court was definitely on the wrong side of history. Consider, for example, the Dred Scott case, in which a slave, Dred Scott, living in a free state sued for his freedom, but was denied when the Supreme Court declared he lacked standing to sue. Or look at cases such as Plessy v. Ferguson, which created the doctrine of "separate but equal" that allowed segregation. And let's not forget Lyng v. Northwest Indian Cemetery Protective Association , which gave the U.S. the right to develop sacred Native lands.

Sometimes, though, the Court gets it right. And this is one of those times. In a 5-4 vote, the Court has ruled that same-sex couples should have the same marriage rights as straight couples, and that is cause to celebrate.

So to reflect on the ways the Court can be an instrument for good, here are five Supreme Court cases where love won out in the end.

In 2007, the Supreme Court ruled in favor of Oren Adar and Mickey Smith, a Louisiana couple who were told they could not obtain a birth certificate for their child because they were unmarried — and unable to get married in the state of Louisiana. It made it easier for gay couples across the country to adopt children.

In 1978, the Supreme Court ruled that the state of Wisconsin could not place an extra burden on parents paying support who wanted to remarry. True love wins in the end.

This case from 1987 ruled that inmates in correctional facilities should be free to get married without needing to get permission from a prison superintendent. I guess the Supreme Court really does like it when people get married.

It's kind of amazing to think that states still had laws on the books forbidding "sodomy" (aka sex between two men) in 2003, but some did. Fortunately, the Supreme Court ruled that such laws were unconstitutional, allowing gay men the right to have relationships, and laying the groundwork for the fight for marriage equality.