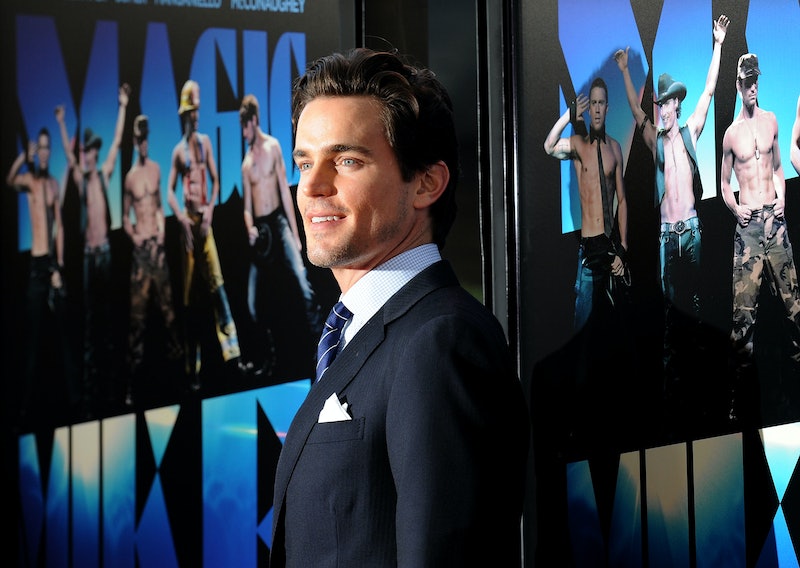 On a balmy afternoon in Savannah, Georgia last October, actor Matt Bomer has just wrapped filming his big dance number for Magic Mike XXL in front of 800 screaming extras. And just as Bomer is sitting down to speak with us about the intricacies of the "stripper odyssey" that is Magic Mike XXL, something magic-al happened before he could even get any words out: One dollar bills began slowly falling out of his pant legs.

"Did a one just fall out of my pants?!" Bomer asks, laughing. "I totally planned that! Hilarious."

A typical XXL moment, this. After all, when you're sent to visit the set of a movie about male strippers, you are prepared to experience a certain number of these visual delights. Hundreds of overly-excited continuously-screaming female extras, for example, a few handsome, famous men dancing around in various states of undress, etc. It's not all superficial however, there is a story here.

"I would say we all have substantially more to do in this film," Bomer assures us. "This movie to me is sort of like a stripper odyssey where it’s a mix of The Last Detail and Priscilla, Queen of the Desert. It’s this group of guys going out for one last ride to try to cash-in and have one last moment of glory before they have to face a really scary reality, which is that they’re kind of getting to the end of their time in their current profession."

For Bomer's character Ken, he's dealing with challenges of the professional and personal variety, which reveal themselves over the course of the film.

"I think you learn a lot about all the guys in terms of where they are, where they want to be," he says. "They’re all looking for what that next chapter is going to be and that’s sort of what you discover about who they are and what they discover about themselves along their fantastic voyage."

Speaking of voyages, Bomer happily admits that his favorite XXL character arc is that of Big Dick Richie, as played by his longtime friend and former college buddy Joe Manganiello.

"Having known Joe for almost 20 years it’s been really fun to get to see him [perform]," Bomer says of Manganiello. "There are just some moments that he has in this film that Channing [Tatum] called it on the set, and I was realizing as it was happening, it was just like they were moments that were destined to happen to him for like years. So getting to see him act those out and get to play this fun meathead with a heart has been particularly fun for me to get to see."

I'm pretty sure that will be fun for everyone to see and that includes each and every one of the other cast member's stripteases which, according to everyone in the cast, are as much fun to perform as they are to watch.

"I’ll be honest with you just getting out there and when that energy of the room takes over, there is something really enervating and exciting and kind of bacchanalian about the whole environment that’s really sexy in a way," Bomer explains of getting lost in the very enthusiastic energy on set provided by the screaming extras and supportive cast and crew. "But then they call 'Cut!' and you put your pants back on and you go back to your mark."

Bomer attributes the bond he shares with the other cast members to that of a football team.

"It’s been really nice to go home at night and there’s an email chain going around amongst all of the guys supporting each other, 'Good luck tomorrow, and 'Great work today,' and all those things" he reveals. "It’s just guys messing with each other with that locker room mentality and making fun of me for the amount of product the hair people put in my hair."

This reminds me that we haven't yet addressed how the XXL actors suffer for their performance art, by way of spray tans, strict diets, uncomfortable costumes and more. Lucky for us, Bomer is at the ready with a show-and-tell of two such examples.

"You mean other than my f---ing disco ball, disco ball freakin’ t-back [thong] that I have on right now?" Bomer says of his uncomfortable costume, lifting a very shiny, very thin waistband up from under his pants. "There’s definitely a spray tan, I'm sure you can smell it. It’s so sad that I’ve actually lost the ability to smell it now. I used to smell like maple syrup and now I just don’t even notice it any more," he sighs. "What’s the day-to-day maintenance like? It’s not that crazy. I think what you’re going to find in the movie is there’s a lot of the guys and their personal lives and obviously when it’s time to go on stage you’ve got to bust out that razor and go against the grain, baby."