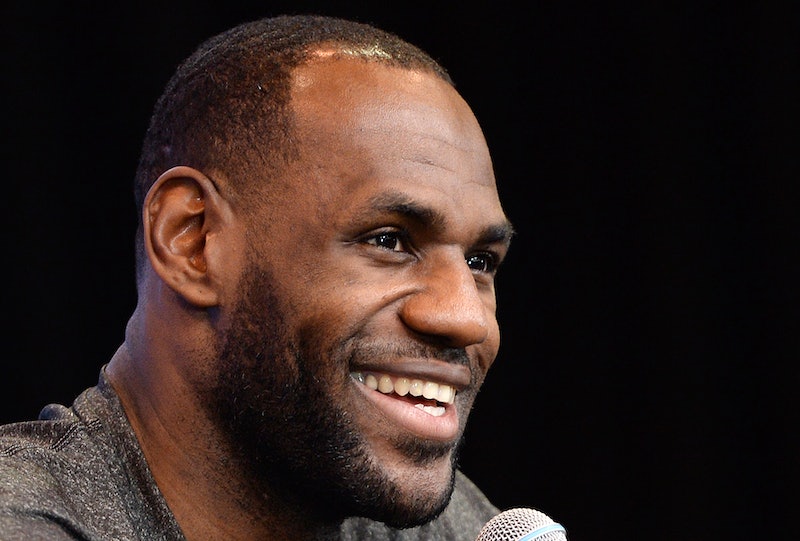 LeBron James may have the biggest claim to fame in his family of five — you know, being a freaking NBA icon and all — but I'm would argue that the real stars of the James family are LeBron James' three beyond adorable children: 10-year-old LeBron Jr., aka "Bronny," almost 8-year-old Bryce Maximus, and little baby Zhuri, who is not even one but is already a straight-up baller (bawler?). But first, let’s start out with some James family facts to give a little context into the lives of their badass offspring.

LeBron James and his wife, Savannah Brinson, first met in high school, making them high school sweethearts and making this story even all the more sugary sweet. According to Hollywood Life, Savannah was actually pregnant with Bronny while still in school and gave birth to him in 2004. She went on to have Bryce in 2007 and Zhuri in 2014, and in between there tied the knot with her NBA player beau — after he proposed on New Year's Eve, of course.

Sure, the James fam may not have done things in the traditional order, but they’re also not exactly a traditional family. And below is some straight-up undeniable proof that they are doing things right:

1. LeBron James Jr. Is 10 And Is Already Being Recruited for College Basketball

"Bronny," as he's known to his family, is following in his father's footsteps and is already so insanely talented at the basketball that he is actually being recruited for college basketball. At age 10. While his talent for basketball is seriously jaw-dropping (just check out the video above), that doesn't mean that Dad is happy about the whole college-recruitment thing.

"My son is going to be a kid as long as he can be. That's all he needs to worry about," LeBron James Sr. told ESPN. "He loves to play the game of basketball, he loves to play video games, he loves to do his homework. That's all that matters. Everything else doesn't matter. He loves his brother, his sister, his dad, his mom, his grandmom. Let him be a kid."

2. They Are Already More Stylish Than Any of Us Will Ever Be

Besides the fact that Bronny and Bryce have two of the sweetest faces in all of existence (JUST LOOK AT THEM), their first-day-of-school fashion game is literally off the charts. Between the badass lion backpack and all of that neon (note the color-coordinated sneaks and polos), there is no doubt that the basketball star's sons are easily the best dressed kids in their elementary school.

3. Baby Zhuri Is Not Even One And She's Already "Running The House"

Like the one-month-old baby she was at the time. #BossStatus.

4. Plus, She Has Killer Taste In Music

Only the best of the best for Baby Z.

5. They Take The Best Family Vacations

I literally cannot deal with the James' family's excitement at Bronny catching that giant tuna. And the look on his face?! It's freaking presh, I will tell you that. And no matter what exotic locale they go to — or the fact that this video was probably taken on some luxurious yacht — the most important thing to their family is that they are together, freaking out over a fish. They are ecstatic with pride for their son and his accomplishment. And that is seriously the most baller thing of all.

6. Bronny And Bryce Kill It On The Dance Floor

7. Their Parents Are Completely Dedicated To Their Family

LeBron James has spoken candidly about how he did not know his father growing up, a part of his life that not only turned him into the person he is today — but made him determined not to miss a moment of his children's lives.