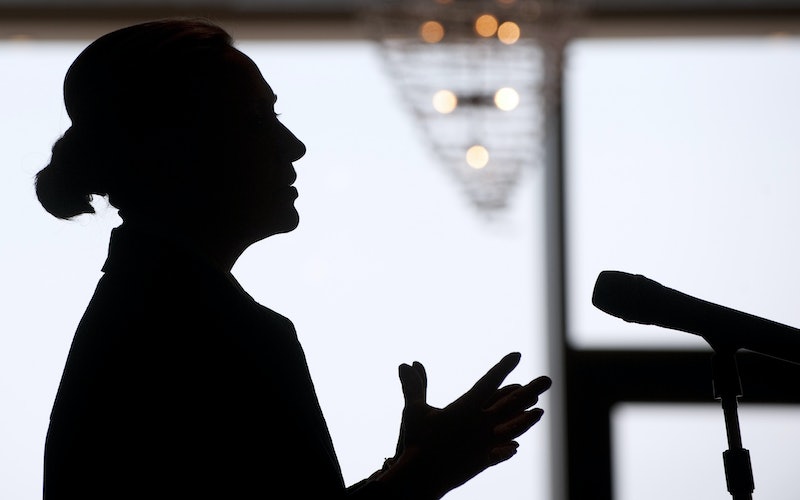 On my second day using Instagram, I was still convinced it was a private photo-taking service that added filters to your snapshots and saved them to a little folder just for you. (I am #blessed that I only had 2 Instagram followers at the time.) Not Hilz. On Thursday, just one day after her colorful arrival on Instagram, Hillary Clinton's first Instagram campaign ad arrived, filled with blink-and-you'll-miss-them photos of Clinton throughout her life and priceless old photos of Clinton and Bill (because, you know, #tbt). The short video also featured Clinton speaking passionately on gay rights and women's rights — two issues that underpin her platform — alongside supporters' voiceovers: "She inspired me to find my voice," says one, and the other notes, "She fights for what she believes in, and what she believes in is the American people."

With several months until primaries, and an entire year and a half until the election itself — is there anyone that really believes Clinton won't be the party's nominee? — Clinton is already confident in the specifics of her platform. Take the Bill montage: The other two members of Clinton's potential First Family, Bill and Chelsea, are already more than a little well-known from that other time they were First Family, and if her first Instagram video is any indication, Clinton will spotlight that family unit on the campaign trail. Bill is featured heavily in a pretty amazing #tbt montage (whoever taught Hillary about Instagram deserves a medal) that flashes by in the video.

It's no accident, however, that Clinton's life in the video flashes by very quickly. (And not just because Instagram video has a time limit. Well, not just that.) The video dramatically slows down to showcase Clinton speaking about the importance of women's and gay rights, implying that her life, until now, has led up to this — not her first presidential campaign, but, hopefully, the one that will take her back to the White House.

It's worth mentioning that Clinton's pro-women stance has been a lifelong theme, whereas gay rights has not. The first clip shows Clinton in 1995 giving her landmark women's rights speech in Beijing, in which she famously declared, "Human rights are women's rights." While never anti-gay rights, Clinton didn't formally come out in favor of same-sex marriage began legal across the United States until 2013 — almost two decades after she made herself known as an authority on women's rights. In the video, the side-by-side comparison is glaring: 1995 Clinton, shown in grainy footage, beside 2011 Clinton, using similar terminology in high definition a generation later.

Although what's spotlighted in the video is Clinton's human rights activism, the whole thing is more feminist-leaning than anything else. The voiceovers of supporters are women; the images of Clinton's life that flash by feature a variety of women; her stance as pro-women is the first thing Clinton herself says in the video. As a gay rights supporter, Clinton is passionate, but undeniably late to the game; as a women's rights champion, Clinton has decades' worth of achievements under her belt. It underpins her campaign, and it's only fitting that it's the backbone of her first Instagram photo, her first Instagram video, and the ads we can expect in the coming months.