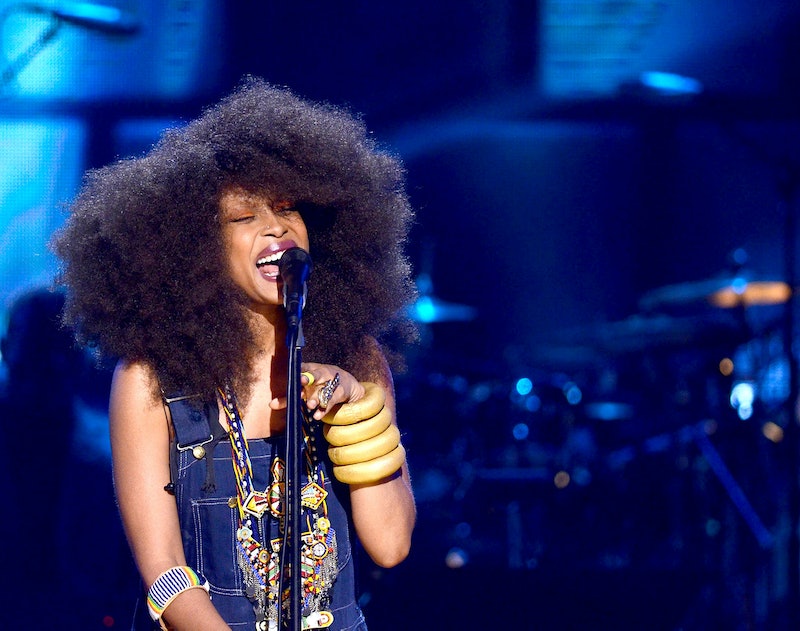 There are a select group of celebrities that I would refer to as "my idols." When you combine Erykah Badu's new bowl cut with every other hairstyle she's ever had, you can understand why she's definitely my hair idol. As I've grown, the way I interpret her music has changed — much like her hairstyles. With each change (of her hair, that is), I gain a little more courage to reach outside of the box when it comes to my own 'do.

From belly-length braids to a her many epic afros and even a buzzcut (my personal favorite), the list goes on and on. All making this new severe chop less than a surprise. Badu unveiled her new look on Twitter, with one of her simple, yet striking shots. "Shroom," Badu captioned, quite accurately. Her new hairstyle is basically the bowl cut everyone rocked in elementary school, but way cuter, due to its thickness. Maybe it's the humidity talking, but I've been out of my mind when it comes to my hair, so Badu's new cut is here just in time. I do wonder though, how is this style going to change her natural styling?

All of my excitement aside, this is definitely not the first time Badu has ventured out. In reality, she's being doing this crazy hair swap things for years! As a result, i'm left with one wish: for Badu-like hair. Maybe I'll be brave enough to go where her strands have gone in this lifetime. Until then, check out the 9 times Erykah Badu was my hair idol.

Since this is the latest, it should be the first. While everyone else is going natural (she's been there), Badu decides to go without. Now that's a real trendsetter, people.

Even though it may be difficult to see, Badu totally makes it work. Not only do I love the color of this hairdo, but I also love the size. It's really hard (and slightly frightening) to wear a big style like this, and I think she does it with ease.

Again, Badu is showing off another look that's hard to pull off. But it looks so fitting, on her. She looks like what everyone hopes to look like at Coachella.

This is totally my favorite look. Mostly because I have buzzcuts on the brain, but also because of how simple it is. Her face is the main attraction, for once.

Although I often talk about natural hairstyles, I'm not against straight hair. I actually have my hair straight a few months out of each year, just to switch it up. Honestly, Badu's length is a goal for anyone, natural or not.

I will probably never try this look, but it's a great example of a time Badu hit the mark with something so different. Be sure to peep those amazing beads at the bottom of her braids.

Once again, Badu was rocking scarf styles long before us. I feel like it was one of her Baduzims. My question is though, did she have help? Because I can't understand how she got all of those in there. Cleva lady.

The thing I like about this one is that as similar as it is to her original fro, it has so much more texture, and it's definitely fitting of a DJ queen.

More like this
The Secret To Taylor Swift’s Fringe, According To The Experts
By Orla Pentelow
The $6 Drugstore Beauty Product Taraji P. Henson Uses Every Single Day
By Danielle Sinay
The Best Beauty Looks From The 2022 BET Awards
By Audrey Noble
Why Sarah Jessica Parker Wanted Fans To Stop Calling Her Hair Choice “Brave”
By Brad Witter
Get Even More From Bustle — Sign Up For The Newsletter