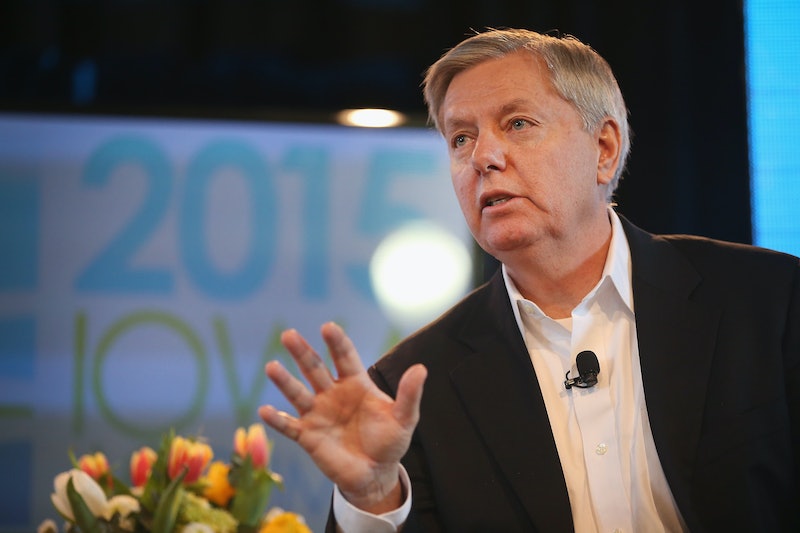 The first ladies exhibit in the Smithsonian features dresses from some of the country's favored first ladies — Jackie Kennedy, Michelle Obama, and Hillary Clinton's sparkling frocks all get long glances from visitors. But if Sen. Lindsey Graham were to swear in as president come 2016, there might be no new addition to this particular exhibit; Graham is notoriously single, and everyone seems to care an awful lot. Since he announced his presidential bid June 1, Graham's bachelorhood has been one of the main topics driving conversations about the 59-year-old South Carolina senator. This public discussion brings about a bigger question: Why does the fact that Graham is a bachelor seem to be the most important thing about him?

One of the most popular of these comments was accidentally picked up on a microphone from Sen. Mark Kirk, who said that if elected, Graham would be "a bro with no ho." Kirk has been known to take his words back in the past, especially when he made a comment about "driving faster" in black neighborhoods. He has since come out to say that his snide comment about Graham was a joke — though his comment hasn't gotten many laughs.

Although he might not have made the wisest choice in diction, Kirk might be on to something. CNN reports that the American people haven't voted for an unmarried President since 1885, when Grover Cleveland was elected. He and James Buchanan are the only two bachelors in history to hold down the White House. Plenty of people seem to be concerned with breaking a 130-year tradition. Kirk's comment might be the first to have been unfortunately picked up by a sneaky microphone, but it certainly wasn't the original.

Graham has joked about his own bachelorhood, saying he might have a "rotating first lady" — a line-up that he said could include his sister. But in the tone of "OK for me to say but not you," Graham reminded the public that a president sans wife does not equal defective leader, according to Politico.

The Washington Post reminded the questioning public that more Americans have become increasingly single. The Washington Post reported that 100 million American adults are single today, but even with these stats, people seem to feel differently about the person occupying the Oval Office. However, others see how ridiculous it is to even be discussing Graham's love life and its effect on his ability to sign bills into law.

Regardless of the comments, Graham is in the race, and there are no rules that say he has to have a spouse's name accompanying his on the ticket. So Americans, yes, Graham is single. Get over it.