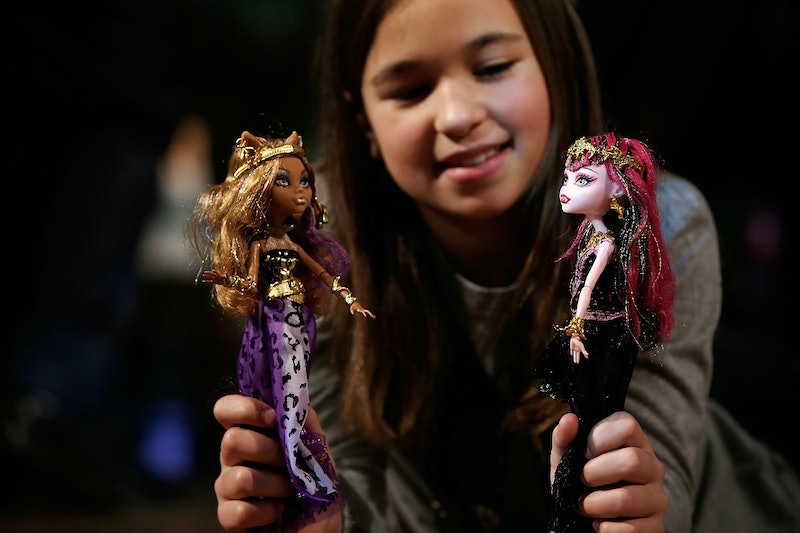 A casual walk down the aisle in any toy store reveals a gendered toy divide so intense, it would give anyone with feminist beliefs a coronary: there are dolls, kitchen toys, and domestic appliances packaged for girls, while trucks, Lego, trains, engineering games, and "macho" toy soldiers are aimed at boys. Activists have been fighting against the idea of gender-typed toys for decades — but scientists are increasingly wondering if gender differences in toy preference, at least among very young kids, aren't just the product of socialization. Some recent research has suggested that girls don't just pick up dolls because society urges them to; girls may naturally prefer them.

I come to this with a unique perspective: as a young girl, I was crazy about dolls. I collected hundreds of them — over 80 Barbies, as well as big porcelain numbers from Germany and Switzerland (one over four feet tall). I loved them desperately, but I don't remember why. I look at my collection now with the air of an astonished anthropologist. What on earth was I doing? What did I want with four hundred glassy-eyed, straw-filled girls staring down at me?

There's been a lot of literary and philosophical work around our relationships with dolls. Freud thought dolls were a basic manifestation of the Uncanny, the familiar-but-unfamiliar; Rainer Marie Rilke hated dolls and their "horrible dense forgetfulness." But only recently has scientific research on whether children have innate, gender-based toy preferences — whether girls really do just love dolls — begun in earnest. So, are girls pushed into a nurturing role, or do they just want dolls without being told to — and if so, why?

What Monkeys Tell Us About Guys And Dolls

A lot of the scientific research about whether girls innately prefer dolls focuses on another animal entirely: monkeys. Why? Monkeys have never been told that dolls are a "girl's toy." They're not subject to the same social pressures that a human child experiences.

The studies of monkeys suggest that they definitely have gender-specific toy preferences — and they're very similar to ours. A 2002 study showed that female vervet monkeys adored dolls and males loved toy trucks — and they even played with the toys in the same way small children do. Gender-neutral toys — like a stuffed dog and a picture book — were adored equally by all the monkeys.

In 2008, the experiment was repeated with rhesus monkeys, and something interesting happened: male rhesus monkeys wanted to play with "masculine" toys, all the time. But the female rhesus monkeys showed "greater variability in preferences" — meaning, they liked dolls a little more than other toys, but were open to all kinds of toys overall. And other research found that young female chimpanzees make their own dolls, carrying and babying sticks around their habitat.

But monkeys aren't human babies — so, for skeptics, this research doesn't prove anything at all.

Babies And Doll Faces: A Match Made In Heaven?

If you look at human-centered experiments, the picture starts getting a bit more complex. A 2012 study from Texas A&M University tracked the eye movements and the hormone levels of three-month-old baby boys. The boys were monitored to see how much time they spent staring at dolls versus how much they spent looking at more "male" toys, like balls and trucks. The result? The more male hormones the baby boys had, the more time they logged looking at stereotypically "male" toys.

Clearly, there's no way to suggest to a three-month-old child that they should like trucks better. But this study isn't without its problems. Critics have raised the point that we don't know why the babies were staring at the toys.

And a 2013 study actually suggested another idea: that the babies stared at whatever toy looked like it had a face. Australian research on four- and five-month-old baby boys found that their gazes lingered longest on objects that looked as if they had facial characteristics — like dolls. Gender-specific preferences for toys only began after the babies were at least five months old.

A study conducted in 1986 points to an interesting idea: it's boys who start to express explicit preferences for "male" toys as they grow up, while girls seem pretty chilled out about it for much of their childhood. This may be due to a combination of factors — girls are typically allowed to play with all kinds of toys without consequence, whereas boys are "policed" to avoid toys that are considered feminine.

And just because you play with a particular toy doesn't mean you only interact with it in a certain way. Dolls can be made to race, and trucks can be cuddled and carried around. Toy preference alone doesn't tell the whole story. So when it comes to girls, boys and the toys that want to play with, any generalizations are murky at best.

What Are Babies Really Thinking?

Of course, because babies can't tell us what they're thinking, it is often hard to make sense of their choices, even after rigorous scientific analysis. And many of the studies about what babies prefer seem to contradict each other, or leave dangling questions about nature and nurture.

Back in 2011, Dr. Qazi Rahman told The Guardian that girls seemed to prefer toys that "indicate some kind of individual," while boys went for "objects with moving parts," but that it was very different to replicate findings to figure out why. He also pointed out that gay men often report "gender-nonconforming" toy interests as kids.

Some scientists think girls prefer pink because they've been conditioned to — because that's generally the color of their favorite toys, and they associate it with nice things. Boys, meanwhile, are often actively discouraged from liking pink, and thus don't psychologically connect it with approval or love.

And a 2009 study seemed to disprove the conventional wisdom that boys are inherently more interested in "active" toys, like balls. All this research leaves plenty of questions about cause: do boys look for toys that will help them develop stronger spatial reasoning? Are girls drawn to dolls because of an evolutionary desire to care for children, or because they're copying their mothers? Are gender roles embedded in our baby veins? Or is it all just nurture disguised as nature?

It's pretty difficult to pinpoint "innate" likes and dislikes in small babies — but we do know that they're learning and discovering every day. After all, kids are often given gendered toys from an early age. Kids are like sponges from a very young age, soaking up all the stimuli around them — and biological factors are probably just one element in the much bigger picture of how we develop our likes and dislikes, as well as our preferences about fun and play. A very tiny child's choice of toy might be more nuanced than it looks.

So Do Girls Really Prefer Dolls?

It's unclear. Young boys seem to like "boy toys" more, while girls don't seem to have a preference one way or the other until a later age — but nobody can really figure out why, or point the blame to society, hormones, or another particular cause. So don't feel like you're depriving your kid or messing with their natural urges if you only give them gender-neutral toys. Frankly, I'm going to start buying all my friends' babies giant stuffed koalas. How could you possibly lose with giant stuffed koalas?