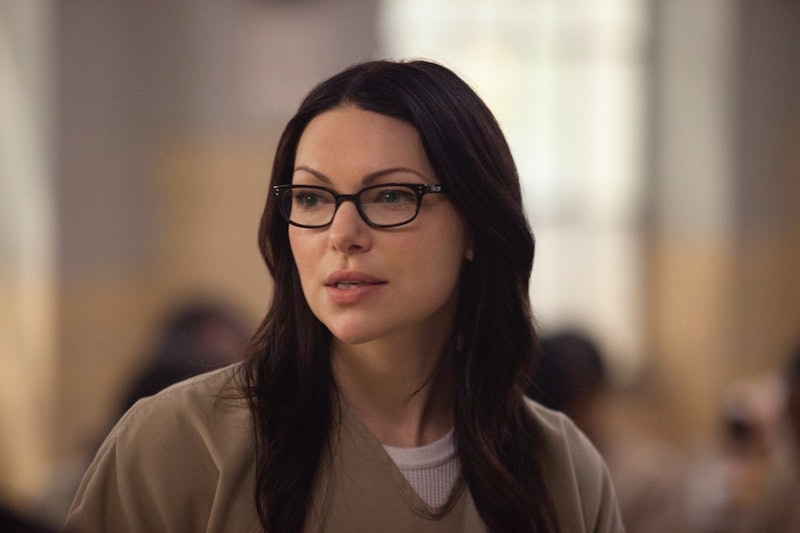 Orange Is the New Black may make the idea of prison seem almost alluring at times with its complex characters and intriguing storylines. That being said, the series also isn't afraid to throw us a reality check every so often and remind us just how violent and scary prison life can actually be. Take, for instance, what happened to Alex Vause in the OITNB Season 3 finale. (Those of you who have yet to reach this point in your binge-watching endeavors, I suggest you head on over to solitary confinement for the time being. Spoilers ahead!) All season long Alex has suspected that her former drug boss (you know, the one she ratted out in Season 2) would send one of his minions to infiltrate Litchfield and kill her for betraying him. Piper thought she was just paranoid, however, the finale proved just how valid her worries actually were.

While finishing up her work shift in the greenhouse, the new prison guard Lolly had warned Alex about ("toothpick guy") finally showed his face, revealing himself to be one of her ex-boss's associates. "You don't have to do this," Alex pleaded. "Yeah, I do," he responded. We don't see what actually happens after this little interaction, but judging by the terrified look on Alex's face, I'd say things were heading a pretty bad direction. It's unclear whether or not he was sent to actually kill Alex or simply leave her with some pretty serious injuries. Either way, though, things are not looking too great for Alex, regardless, which means she could've ended up meeting a fatal demise.

This series has already proven it isn't afraid to kill off inmates (RIP Rosa and Vee), so having Alex die is certainly a possibility. However, given the fact that we only just got Alex back in a full-time capacity this season, I have a hard time believing it was only so we could lose her yet again by season's end. Enough with the back and forth, Orange! We love Laura Prepon too much to see her go.

So if I were you, I wouldn't completely write her out of the picture just yet. This character has been known to be pretty resourceful in the past, having wormed her way out of similar situations prior to this one. There's a chance that her quick thinking and resourceful nature may have gotten her out of this sticky situation. Or perhaps they were interrupted, giving Alex enough time to slip out of there unscathed. (OK, fine, maybe I'm reaching a bit on that one, but can you blame me for being in denial?) Alex may not be my all-time favorite character on this show, but she's definitely in my Top 5 and someone I'd like to see return when OITNB Season 4 comes around.

So, for now, let's try to remain blissfully optimistic about Alex's fate and pray to Toast Norma that she'll live to stream on Netflix another day.