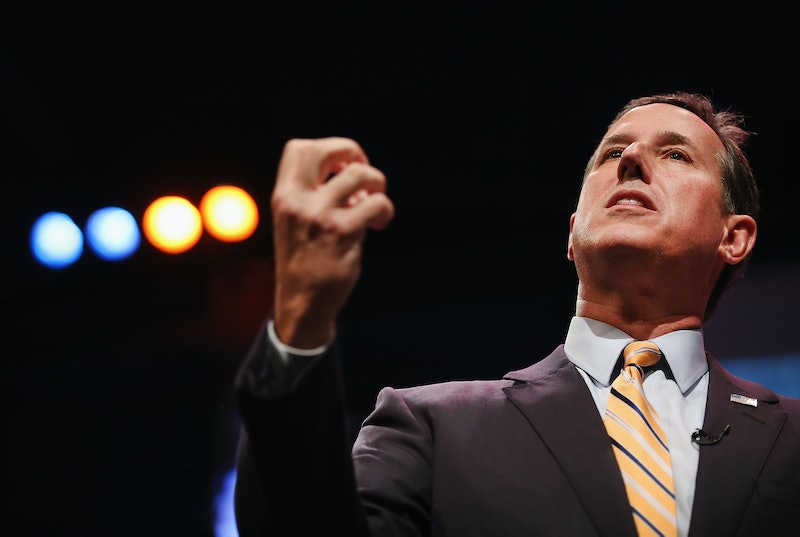 While announcing his presidential bid, Martin O'Malley called Bruce Springsteen "the poet laureate of the American dream." As a former music critic myself, the Democratic hopeful's Springsteen reference and past as a musician were great signs of what was to come. I could've never predicted the horri-bad song that would come of his bid only two weeks later. That's right, O'Malley had an unofficial tune written about his presidential bid, and it is awful. But it turns out that he isn't the only 2016 candidate plagued with a terrible campaign song.

Rick Santorum, Hillary Clinton, Ted Cruz, and Rick Perry have all had songs penned about their races — some commissioned, some not. But I'll tell you what they all have in common — they're horrible. Really. This isn't me coming from a position of musical superiority. I'm telling you that as a consumer, it is in your best interest to stay as far away from these tracks as possible.

Music has always been a huge part of presidential campaigns, but it's usually a carefully chosen song that already existed. President Obama released a whole playlist of songs that he (read: some savvy intern) picked to match his platform. John McCain used to blast ABBA's "Take A Chance On Me" at events. It turns out that the Swedish disco stalwart is one of McCain's favorites (really!).

Who knows why there have been so many originals already this year. Maybe politicians finally figured out that the aforementioned Springsteen's "Born in the U.S.A." isn't an expression of patriotism, but in fact a condemnation of the military-industrial complex. Who knows?

But because I'm here to serve you, potential voting patriots, I've put my music critic hat back on and reviewed these tracks. Seriously, politics aside on this, here's what I think of this crop of campaign trail carols. Believe me, if these songs had any indication of how these candidates would govern, then America should be very scared. Or elect Bruce Springsteen.

It's true, Martin O'Malley has his own band, O'Malley's March, and perhaps if he's as much of a "fantastic musician," as the Corrigan Brothers allege, then he should have taken care of this ditty himself. This unofficial campaign theme song plays into the ebullient Irish rock aesthetic of bands such as The Proclaimers, but without any of the, you know, talent.

It's got all the makings of a barroom chorus shouter — piano runs, an instantly memorizable chorus, campy horn refrains — but the pieces are ultimately more exciting than the whole. There's nothing underneath the thin beat to drive it, so the flat layers make it sound like a midi you would've embedded on your Xanga circa 2001.

But the Corrigan Brothers did at least one thing well — writing a simple song that can easily embed itself in your brain. Unfortunately, the effect is kind of like a fungus: It stays with you and grows until it eventually makes your brain rot.

Grade: I'd rather listen to 10 Rand Paul filibusters.

"Rick Perry supporter, let’s protect our border/To hell with anyone who don’t believe in the USA/Rick Perry all the way."

Oh, hick-hop. Rick Perry swaggered on stage to this to announce his presidency, but it wasn't written for him originally. Perry's team tapped the artist, Colt Ford, to update one of his verses to include the GOP candidate. Even with the rest of the song left as is, its defiance works pretty brilliantly to summarize the candidate.

Honestly, if anyone has the gravitas to pull this off, it's Perry. And the song might have been tolerable if it had showed a little restraint. Unfortunately, it taps into the "We Will Rock You" boom-boom-clap as its main beat. That, coupled with country rapper JJ Lawhorn's aggressive freedom-loving and a braggart chorus from Ford, just made for too much. Way too much. It came across as more terrifying than inspirational.

Grade: If I never listen to this again will Rick Perry kick my ass?

OK, lady was rhymed with lady. I understand that happens, I do. But please, just listen to this once and you will see how awful this is.

I'm hoping that pro-Hillary bro-country isn't a thing. There's something inauthentic about hearing Clinton memorialized in a country song, even if she didn't ask for it. It's this wistful, pining country song that sounds a little more like yearning for a lost lover than rooting someone on for president.

Much like Clinton's affected accent in southern states, Orozco seems to be playing his up more than it actually is. That matches the song in its entirety, really. It's a little too heavy on the quintessential country elements, the steel guitars whines coming across like an imitation rather than an expression.

Grade: I'd rather keep sitting, thanks.

Ted Cruz: We Are Watchmen, "Set It On Fire"

If you're going to "make DC listen," I suggest you do this with a different song. Christian rap group We Are Watchmen are certainly earnest, I mean they wrote the song without prompting from Ted Cruz. At times (rare times, mind you) in the four minute song, there is some clever wordplay and even a Reagan reference! But that's shadowed by the sloppy delivery and an unnerving piano riff that plays in the high keys The. Whole. Time.

The rapper can't quite decide if he's spitting a track or having a conversation, so you end up with some awkward middle ground that leaves lyrical gaps — gaps filled with that damned piano and an actually tolerable clap track.

Mostly, I leave this song with a lot of questions: Are there a lot of rappers supporting Ted Cruz? Were these guys actually around when Reagan was in office? But mostly, what the hell is fed stew?

Grade: I'd rather eat whatever fed stew is for a week straight.

I doubt that Rick Santorum was thinking of Shakespeare when he adopted this as his campaign theme song, but there is a lot to be said of brevity. This uncredited track is only 45 seconds long, just enough time for a stage entrance (or exit). And it's not long enough to be awful!

Plus, it's catchy as hell. Really. It's got the same country aesthetic as nearly everyone else's song, but it only includes the best part — the intoxicating chorus. Then it ends.

I think this might actually be the most brilliant thing that Rick Santorum will do on the 2016 campaign trail.