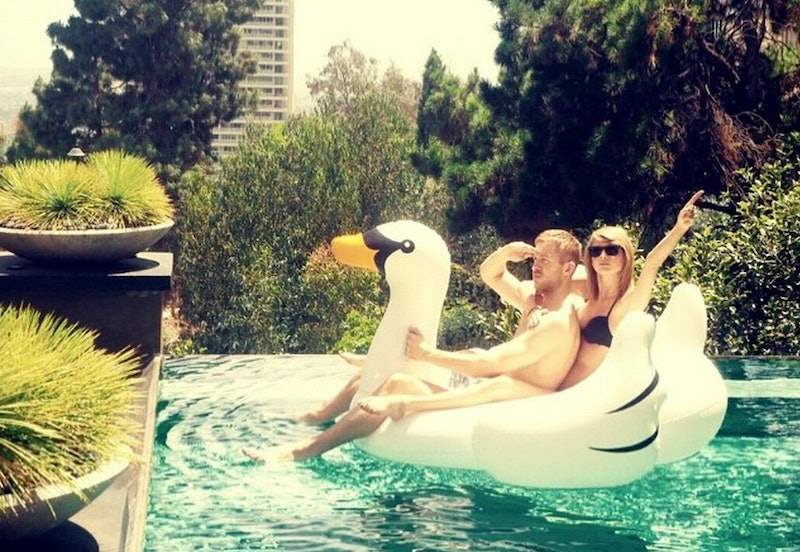 What makes for a better summer than warm temps, sunshine, and lounging by the pool? How about a giant swan? Yes, you heard me. Ever since Taylor Swift and Calvin Harris shared a photo of themselves swimming with a giant inflatable swan, everyone wants to float with a very large bird. Come on, you know you want to, too. If T. Swift and her man are hangin' on a swan, you know other people are going to follow in her footsteps. Plus, it makes for the perfect way to catch some rays, read your favorite book, and sip on a cold beverage (Sam Adams for me, please).

Like Swift and Harris, do you think other celebrities are chilling with blown-up pool swans? You betcha. For example, two members of Bravo's hit reality Southern Charm love getting their swim on with the help of a friendly giant bird. Also, a particular actress from Showtime's Shameless and two cast members from the most popular reality TV family ever also can't get enough of their pool swans.

So, just who am I talking about? Well, you'll have to keep reading to see — trust me, it's totally worth it. Now, who wants to invest in an inflatable swan with me? Any takers?

Of course, two members of Bravo's Southern Charm would lounge on a giant swan.

She's bold, because actually uses it as a lounge chair. It definitely goes with her décor.

The Shameless actress took Coachella to a whole new level by swimming with an inflatable swan. That's how a music festival should be done.

This might not be the Keeping Up With the Kardashians star on the swan, but she sure owns one.

Yes, Kendall also loves chilling on swans, because, of course she does.

The model was ahead of the times. She was spotted on her swan last October.

You've never wanted a giant inflatable swan more, have you?

More like this
Taylor Swift & Her Mom Clap Back Against The “Shake It Off” Plagiarism Lawsuit
By Jake Viswanath
Taylor Swift Calls Dwayne Johnson "The Man" After Revealing New "Taylor's Version" Song
By Jake Viswanath
Taylor Swift’s Reported Private Jet Use & Carbon Footprint Set Twitter Ablaze
By Stephanie Topacio Long
Where Was 'The Bachelorette' Season 19 Filmed? More European Destinations Are On The Way
By Radhika Menon
Get Even More From Bustle — Sign Up For The Newsletter