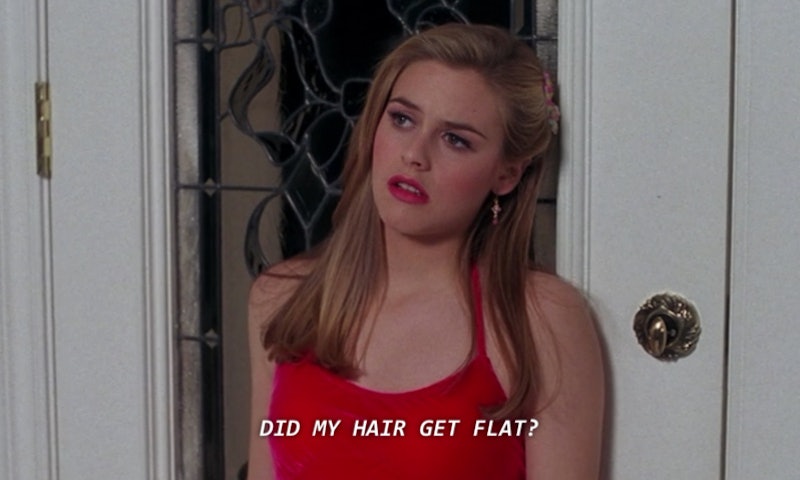 It's rather unfortunate when things don't pan out in the way you hope or would like them to. But that...kinda happens a lot. One common thing that frequently doesn't work out are crushes. Like, no one knows what to do when you have a crush. And if you crush like I do (i.e., compulsively), the game o' numbers dictates your chances of someone not returning your affections is a bit higher. It's OK! Seriously, it is. However, as we grieve together, we can bond over things we do when a crush doesn't like us back. Because, for the most part, we all do the same sh*t when a crush turns sour.

First of all, let's just assume we're all grown-up folks who know that another human not finding us as sexually, intellectually, and spiritually appealing as we know we are at our core, life goes on. We know that, even if it is a knowledge that hides very, very deep down, buried beneath miles of bruised ego. Despite that mature truth, I think it's wise to reserve the option to kinda slide back on the maturity level and huff a little. I mean, crushes are the pinnacle of fun. Getting giddy over another human about whom you still know no flaws, no shortcomings, no utter ignorance of the Harry Potter series. It's plain fun to let yourself get excited about the chance of possibility. Crushes, in a way, are basically the embodiment of Friday night as a person: so shiny, with so much opportunity for laughs and sexy times.

But! Crushes are also called such for a reason: When not reciprocated, the ensuing emotional state is pretty crushing. Here's some things we all do when a crush doesn't like us back:

Upon discovering that a person we find hot does not see our own hotness for whatever reason, a habit many of us indulge in is immediately feeling bad about ourselves. We're prone to momentarily regretting our moment of boldness in pursuing a person we feel we want. But the truth is, no one should feel badly for being brave. After all, in any happy relationship, someone was the person who made the first move. It's just in this case, sadly, it is also the last move. It's OK to brew here for a second.

Tossing back a few misery margaritas

IT JUST SEEMS SO UNFAIR. Though, as an autobiographical tip, I must be sure to include the next step as a precautionary tip for going deep on the misery margs...

Deleting their number and your text history

This is especially important since we are now in the time and age of sharing information such as feelings and lack of feelings via text as opposed to face-to-face contact. One spectacular instance in which I was rejected by a crush happened 10 Earth minutes after we parted from what I thought was a successful, two-hour-long date. After chatting and sipping beers on a cute back patio for a good minute, that coward dude waited until I walked a few blocks away to fork over a heap of words essentially spelling out that he wasn't interested in meeting again in a romantic way, blaming his guilt on a Catholic upbringing. Hey man—I too was raised Catholic but I tell people, if given the chance, IRL how I really feel. Aaanyway, yeah. Instead of reading and re-reading the stinging novel-length explanation, I deleted the text history. Along with his number. It's for the best.

Fiddling around on Tinder

Welp. It's a minor, harmless distraction. And it reminds you that there are more crushes to be crushed, which is essential to the post-rejection, moving on process.

"I LIKE THIS SHADOWY PHOTO OF A MANHATTAN WITH THE MANHATTAN SKYLINE ON AN OBVIOUSLY COOL ROOFTOP BUT I WILL NOT ASSIST IN GETTING YOU INTO THE 11TH LIKE TERRITORY."

Unfollowing them from social media they may not immediately notice

Easily sleuthed out of: Instagram, Tumblr. Less so: Twitter, Facebook. Basically, you don't want to see any fire updates from them reminding you how clever that can be (though clearly that wit has a ceiling and it is wrongly dismissing you as a potential love and sex partner). You also ABSOLUTELY do not want to see photographic or verbal evidence of them enjoying night times with an attractive person who is not you.

At this point, you're indulging a little in all the blue feels. You may marinate for a minute.

Looking at their social media anyway

An act likely fueled by a few misery margaritas.

But you unfollowed them for a reason! Not as a punishment to them or some sort of public slight, more as a measure of self-preservation. A step in helping you stay baseline sane.

Talking shit with your friends

You could use a little help from your crew in downsizing these rejection feels. It might not be ~fair~ but neither is their decision to pass on ~your~ ass! (Or whatever. I just wanted to rhyme but I think the point is still there.)

Embarking vehemently on a short-lived goal

"Time to learn German, FINALLY!" or "If I sign up for a month of these 6AM yoga classes and pay all at once, of course I'll go with unwavering dedication THEN come out of it with a rockin' yoga bod!" or "I am going to buy pleather." Go ahead and do what you got to make you feel momentarily more polished, improved than the version of you they rejected. Just...don't pay for all those 6AM classes at once. Trust me on this.

Unless you're having an amazing hair day, of course. In which case, you sidle up to the bar to make sure they see you in that glittering glory. Since that will clearly be the final trick to making them see the errors in their ways and fall in desperate love with you.

Wondering what the hell you were thinking?

Inevitably you'll run into this person. It's gonna happen. Maybe it happens on that ideal hair day, maybe not. The moment will come and you'll survive just fine because...them? Them? Moving right along...and on to the next (waaay better) victim.