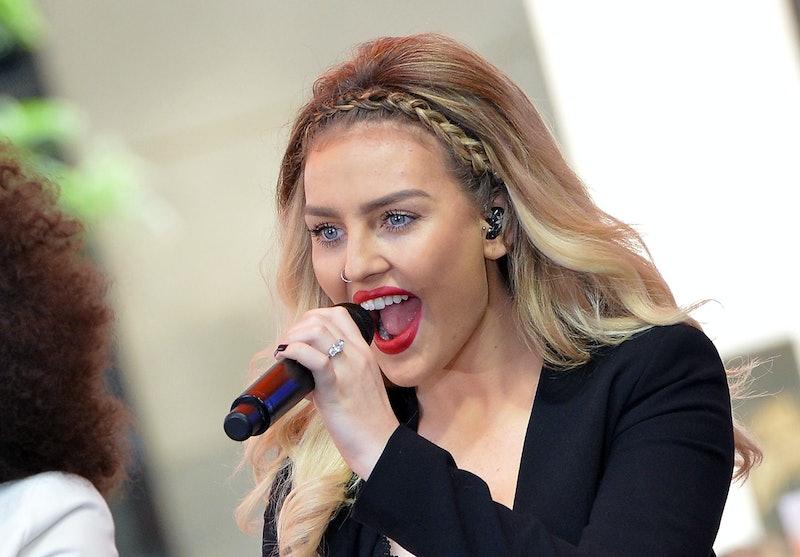 There's a shirt out there emblazoned with the words "Professional Fangirl" and it needs to be in my wardrobe immediately. Like a cartoon character, I'd probably wear it every single day and just have a closet full of "Professional Fangirl" ensembles, which I'd wear in constant rotation, like a uniform that describes my career in one perfectly succinct phrase. This is all to say that I genuinely understand the passion of a fandom (this is coming from someone who wrote an entire essay in defense of One Direction fans mourning Zayn Malik's departure from the band), but even I think that 1D fans need to come down off the ceiling in regards to that whole "Perrie Malik" video.

Perrie Edwards, who has literally been engaged to Zayn Malik since the dawn of time (otherwise known as August 2013), recently made a silly vid with her Little Mix bandmates in which the girls all say their first names with their boyfriends' last names tacked on. It's all very innocent and adorable, but of course fans completely lost their minds and "Perrie Malik" immediately began trending on Twitter.

In some ways, I get it. There's no denying that Zayn Malik quit One Direction just days after he took to Twitter to declare his love for Edwards (and simultaneous hatred towards "the jealous f---s out there"). Many interpreted Malik's exit as Edwards' doing, even going so far as to refer to her as the Yoko Ono of One Direction. (Yikes.)

But this video — which Little Mix's rep even said was "nothing more" than poking some fun at single band member Jade Thirlwall — was actually kind of hilarious and not to be taken seriously. All Edwards did was refer to herself as "Perrie Malik" (while Leigh-Anne Pinnock took her boyfriend Jordan Kiffin's last name, as did Jesy Nelson with Rixton frontman Jake Roche's moniker) and all hell broke loose. Fans thought there was a secret #Zerrie wedding that we somehow all missed. Fans were pissed AF that Edwards was saying Malik's last name like it was her own. Meanwhile, the whole joke and point of the was that Thirlwall is single and is effing adorable about it.

Plus, considering the fact that Zerrie are literally engaged to be married, Edwards, like it or not, will be Perrie Malik one day. And I understand that some fans aren't necessarily ready to accept that or hear her say her future name just yet, but it's happening, whether we like it or not. And if this video was just a tiny little joke, I can only imagine the kind of flames of hell that the real Zerrie wedding will actually release. Good thing the 1D fam is Fireproof.mp3.