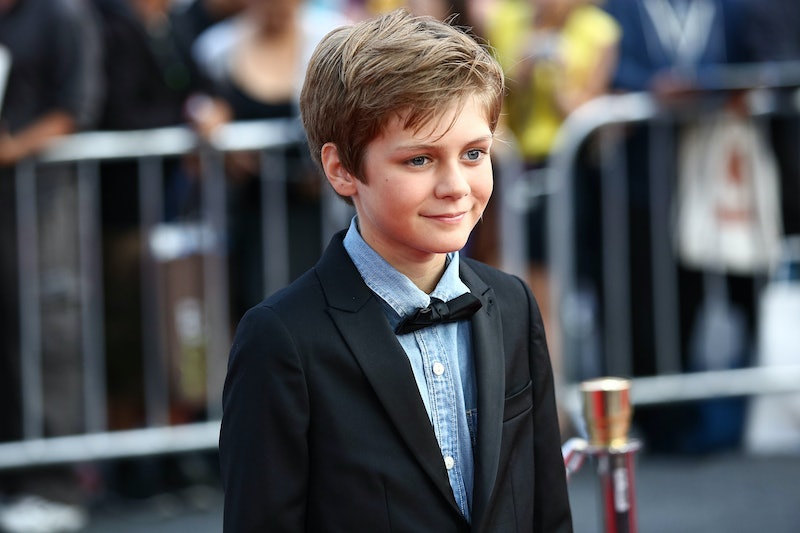 What's a Jurassic Park movie without some kids on screen getting the crap scared out of them by dinosaurs?! The iconic scene, of course, goes to Camilla Belle in The Lost World: Jurassic Park first playing with, then getting attacked by a bunch of tiny dinos, but Jurassic World, which came out on Friday June 12, features two new little kids who might stack up to Belle with their dino-terror-fueled screams. The younger of the two young actors in Jurassic World , Ty Simpkins, who plays Gray Mitchell, the son of Bryce Dallas Howard's character, might look familiar to you. And he should. He's only 13 years old, but he's been in EVERYTHING, so get ready to feel bad about your career compared to a 13-year-old boy's.

So, who is Ty Simpkins, anyhow? The young actor has been working ever since he was a baby. In fact, his first role was as "Jack Manning/Annoying Baby" on One Life To Live in 2001. And even though Jurassic World will forever be the coolest line on his resume and make him the envy of all his friends, he's got some other good contenders, too. I'm guessing that you know him from having your pants scared off by him in Insidious and Insidious 2, in which he plays Dalton Lambert in a house full of ghosties and spirits and Rose Byrne screaming bloody murder. Child actors in horror movies: always impressing me.

He's had plenty of other big-budget roles, too. Simpkins played a small part in 2005's War of the Worlds with Tom Cruise, and he's starred alongside his sister, Ryan Simpkins, as siblings in two films: Pride and Glory in 2008 with Colin Farrell; and as Kate Winslet and Leonardo DiCaprio's kids in the saddest movie of all time, Revolutionary Road. DO NOT WATCH unless you watch to mourn the death of love and the American dream. Child actors in incredibly sobering, sad dramas: ALWAYS impressing me.

And let's not forget when Simpkins played number two to Robert Downey Jr.'s Tony Stark in Iron Man 3 in 2013. He was no second fiddle, either. Simpkins definitely held his own, and who doesn't love a sassy, genius little kid helping Iron Man save the world?

So to recap: at just 13 years old, Ty Simpkins has done more than you will probably do in a lifetime, and his famous friends in Hollywood include the likes of Chris Pratt, Robert Downey Jr., Leonardo DiCaprio, and even Ryan Gosling — the talented little dude will also appear in The Nice Guys, a 1970s detective film written and directed by Iron Man 3's Shane Black. This kid's already big, and his career's just gonna get bigger. He would even be a method actor if he could, it seems. He told Cinema Blend that if there were a REAL Jurassic Park, he would definitely work there. What a fearless teen!