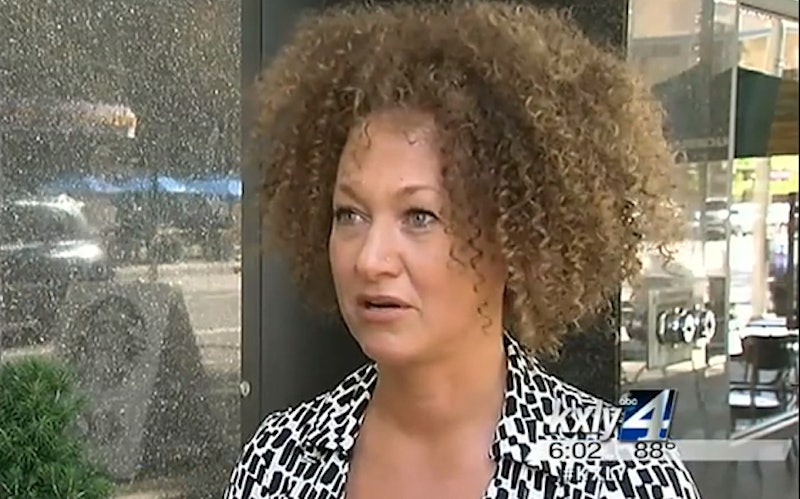 On Thursday, Spokane NAACP President Rachel Dolezal was "outed" by her parents as white, sparking discussion across the country. The civil activist's parents told local TV network 11 Alive that their daughter is white, and added that she's been deceiving the black community by attempting to pass as African-American. Some have defended Dolezal as transracial, but Dolezal herself has said little publicly in the way of explanation. In addition to the issue of claiming an unrelated race as your own, there's also the question of "passing." Dolezal presenting as black further hurts those who actually identify with their race, but may not "look the part" and are actively told so by society.

I've had a parking attendant call out to me, stopping me a full fence and parking lot away, to ask if I'm Sri Lankan — saying I have the right "color." When I told him my heritage was actually Mexican and Sicilian, which ultimately contributes to my darker skin tone, he demanded that I was Sri Lankan instead of taking the logical explanation. Another time, an interview subject for a story I was working on insisted I was Israeli for my last name alone, and wouldn't hear of it that my father's father was German and thus so was my surname.

I've been called a "safe color" and exotic, been asked about my ethnicity before being asked for my name, and even told I'm not dark enough to claim minority status. Each and every one of these examples carry a special type of hurt, reducing me to mere appearance and expectation over who I actually am as a person.

I am Mexican. I'm also a bit Sicilian and German. My middle name comes from my mother's last name: Cadena, meaning chain in Spanish. It's her side of the family that came to California from Mexico just two generations ago. My last name is German, from my father's father. The Sicilian side of the family bears the name "Telucci." I feel strongly about my Mexican and Sicilian roots in particular. It's how I was raised — to be prideful of two very beautiful cultures — and I am eternally grateful for that.

I've also struggled with the idea of presenting because of it. My mother's disinterest in teaching me Spanish, essentially so that I would "fit in" with my primarily white peers, still brings me embarrassment and a sense of otherness I've only recently tried to amend.

I can't expect someone to identify my background immediately, but I certainly can hope they'll respect who I am. Thinking of Dolezal passing as African-American while myself and many other minorities struggle to be acknowledged as what we really are is incredibly frustrating. In allegedly playing the part of an African-American woman, I believe Dolezal is only hurting the community she aims to align with by reducing their heritage to mere presentation. Guardian columnist Gary Younge sums it up perfectly when he questions Dolezal's motives, writing,

There are plenty of white people involved in the kind of civil rights work she was doing – particularly in Spokane, where just 2% of the population is black. Her parents say that she had black adopted siblings, had a black circle of friends where she grew up in Mississippi – that she has married, and later divorced, a black man. All of which might make Rachel Dolezal a white woman who identifies closely with the black community. It does not make her black.

The issue of race is a complex one. Though I am biracial, I am ultimately not African-American. I have not had to struggle with that particular divide. In her brilliant essay on passing and reckoning with identity for Salon, Koa Beck mentions a passage from the 1929 Nella Larson novel "Passing" in which the African-American protagonist is doing just that. The passage reads:

They always took her for an Italian, a Spaniard, a Mexican, or a gipsy. Never, when she was alone, had they even remotely seemed to suspect that she was a Negro.

Even in the 1930s, I would have been accepted and free to enjoy the Harlem Renaissance. There is nothing preventing me from aligning with social causes that advance other minorities whose ethnicity I cannot claim, however. Dolezal could've easily done the same. She's clearly done her research, having served as an adjunct professor in Africana Studies at Eastern Washington University. She now facing backlash, not to mention a truth she appears to have been trying to outrun for years.

All the while, minorities who pass and those who don't face society's reckoning of what the world thinks they should be. In this pivotal and very public moment, it's time for Dolezal finally be herself.

More like this
Manchester Arena Attack 5 Year Anniversary
By Ella Glover
How To Fight For Reproductive Rights, Based On How Much Time You Have
By Courtney Young
Here's How To Practice Self-Love In Small Ways Every Day
By Mackenzie Sylvester
How Sunnies Face Is Championing Filipino Beauty
By Kristin Corpuz
Get Even More From Bustle — Sign Up For The Newsletter