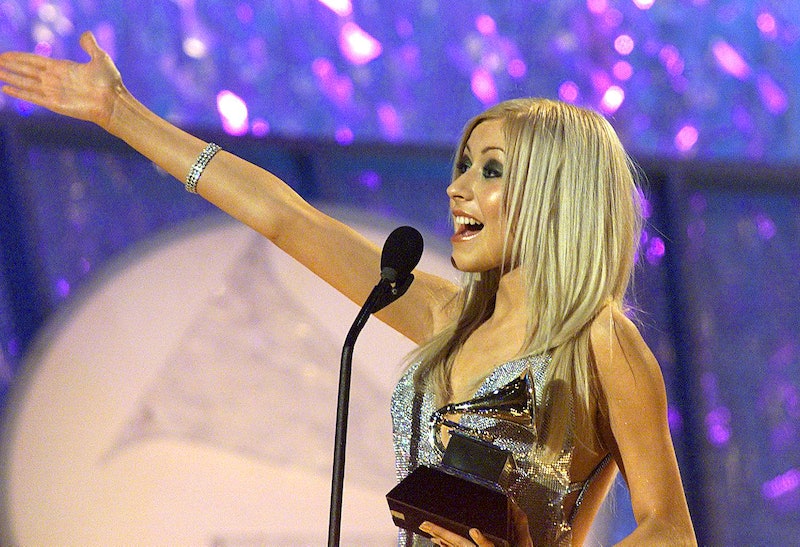 To borrow terminology from '90s AOL parental controls (RIP), I was a "young teen" in the early 2000s and I devoured every freaking teen magazine I could get my Wet n' Wild-manicured hands on, from the classic Seventeen to the edgier ym, which was basically my pre-teen bible. And with the veritable library of magazines at my fingertips (most of which are still living at parents' house, just beckoning me with their late '90s/early '00s euphoria) you better believe that a handful of Christina Aguilera magazine covers passed through my suburban household, from her angelic look on the cover of Teen People to her days as a stringy-haired badass in the era of "Stripped."

Considering my affinity for pop culture knows no bounds — and reliving my childhood via Christina Aguilera's best '90s/'00s fashion moments is probably the best thing to ever happen to me on a Monday — I couldn't wait to dissect everything that was Xtina's cover girl image circa 2001. And I soon found that it made me insanely nostalgic for things like Lip Smackers and my ever-so-trusty Hot Tools hair straightener.

For me, a girl with a celebrity/entertainment obsession so fierce that she literally made a career out of it, Aguilera's early-career magazine covers are so intertwined with my days as a bright-eyed middle-schooler that I really can't separate the two. Which is exactly why this entire feature is like a trip down memory lane for me — and hopefully for you, too.

Get ready for a strong whiff of nostalgia, 'cause it's a comin'.

Christina Aguilera was the cover girl for the inaugural issue of Seventeen's Philippines publication, and everything about her outfit just screams 2000. She is literally wearing an iridescent blue-green tank while holding onto a guy in a straight-up bucket hat. Her stick-straight locks (sooo '00s) hadn't yet undergone the "What a Girl Wants" dip-dyeing yet, nor had they been subjected to the jet black streaks of the "Dirrty" era. They were nothing but blonde and pure, kind of like Christina during this time.

Between Xtina's zig-zag part, genuine grin and long-sleeve crop top as rosy and innocent as her "Genie in a Bottle Days," her first ym cover was bubblegum pop at its finest.

Christina was already vamping up the sexiness for her FHM photo shoot, complete with those red-hot, scaley pants and that slitted, black leather tank.

Between the tongue, torso and Super Girl tank, Xtina's Rolling Stone cover had it all. And don't even think for one second that I didn't notice the portable CD player she is holding in her hand.

The most 2000s thing about this photo may just be the fact that it's Teen People. Good times.

2001 Christina wore a halter top and rocked some frosty mochachino-colored lipstick that I can only hope is made by Bonnebell. I may not remember this magazine (probably because it was Australian), but the cover is making me yearn for some serious dELiA*s catalog shopping.

Two years after her Rolling Stone debut, the magazine had a wildly different Christina Aguilera for their cover. Considering Xtina is virtually naked — save for some black fishnets and one studded glove — this doesn't say so much about her '00s fashion as it does about the entire "Stripped" era, which essentially transformed the pop star from "good girl starlet" to "badass bitch" in one fell swoop.

Fact: This is one of those issues of ym that is absolutely still lying around in my house somewhere. I'm totally digging Xtina's winter white ensemble, but those pencil-thin eyebrows... mmm, not so much. Still, the whole thing inexplicably reminds me of winter breaks full of window-shopping at the mall, probably because that's when I received this issue and every mannequin everywhere was rockin' a similar ensemble. Oh, nostalgia.

Christina was still sporting the reverse ombre in 2003, and just the sight of that giant cross necklace and sparkly labret piercing (side note: is anything more reminiscent of "Dirrty" than those black lowlights and the labret?!) automatically transported me back to after-school hangs at my friend's house, probably reading this exact issue. Also, please note her red newsboy hat.

2004 Xtina was all about dat raven-haired life, and the dark hue made her round, ice-blue eyes so piercing they practically shot right through you. In fact, this cover is so hauntingly stunning that it looks like it could be a still from the "Beautiful" music video, even though her hair in that vid was still mostly the white-blonde shade streaked with black that she wore throughout her Stripped promo. Still, the Christina Aguilera of the 2000s was trying on various personas, showcasing new looks, and discovering who she was — and 2004-era Xtina was getting even closer. She looks stunning.