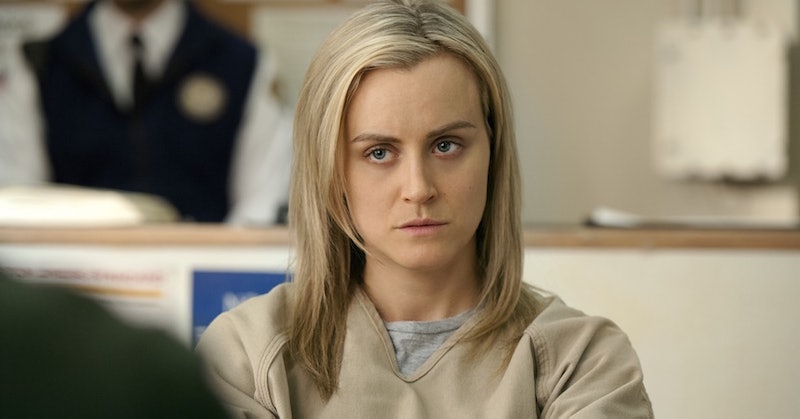 Unless you've been living under a rock for the entirety of Thursday night and Friday, you probably know by now that Orange is the New Black Season 3 was released in full on Netflix. Of course, that only meant one thing for me Thursday night — and that was sitting down in front of my laptop and marathoning all 13 hour-long episodes in a row. (You call it crazy, I call it spontaneous!) After watching all of Season 3, a lot of things about the characters have become clear to me — but nothing moreso than the glaring fact that Orange Is The New Black 's resident yuppie, Piper Chapman, isn’t going to be in prison forever.

I mean, I guess I knew this from the beginning of the show — we all did, really. When Piper was sent to Litchfield, it was only with a fifteen-month sentence. But, I guess with all the trouble she has been getting into and all of the sketchy things that happen behind bars, I was holding out hope that maybe, just maybe, she'd be there for longer and we could get an eternal amount of OITNB seasons. A GIRL CAN DREAM. But stay there forever, Piper cannot. Eventually, she has to leave Litchfield and return to the life that she was living before prison.

But, that reality raises all kinds of questions about Piper’s future. Like, will the show still continue when Piper is out of prison? How much longer will she be incarcerated? Will she return to Litchfield after she leaves to visit the other characters there? And, most importantly, what will Piper do once she is out of prison?

Remember: before her sentencing Piper was living and working in New York City with her fiancé, Larry Bloom. But, over the course of the show's three seasons, their relationship ended, Piper rekindled her romance with previous flame Alex, and her interests in life have been totally changed by her time in prison. Can she even go back to the old life she once lived?

Taylor Schilling, who plays Piper in the Netflix original series, says no. “I think she’s gonna be doing something drastically different with her life,” Schilling said in an exclusive interview with People Magazine. It's fair enough — and it's got me thinking: what will the Piper do with her life once her time in prison is up? Here are just a few ideas that come to mind:

1. Become A Guard At Litchfield

What? She has the inside scoop about how the prisoners act, who’s in an alliance, and where they hide their illegal paraphernalia. She would be perfect at it!

2. Become A Spokesperson For Prison Reform

After a lot of time spent in prison, Piper has been subject to a number of injustices that have made her incredibly aware of the plight of women in prison. There’s no one better to fight that good fight than someone who has been there herself. (Also it should be noted, the real-life woman that Piper is based on, Piper Kerman, is active in the push for prison reform.)

Piper has real-life experience to back up how important it is to JUST. SAY. NO. Plus, imagine the street cred she’d earn and impact she’d have on students everywhere if she brought in other Litchfield inmates to share their stories.

4. Give Into Her WASP-y Background And Become A Stepford Wife

I mean, it could happen. It probably won't, but it could.

The best of both worlds: this option would give the show the opportunity to continue with more seasons after Piper leaves Litchfield, and keep a somewhat similar cast. The Litchfield crew could join after they’re released!

Imagine the patience she’d have for all of the noise and pack mentality. Plus, she probably learned a ton about human behavior in prison.

7. Become A Residence Life Leader In An All-Girls' Dorm

If Piper isn't quite able to let go of her dorm-like life at Litchfield, she could advise both a hallway of girls through their college years, and — OF COURSE — all of the drunken freshmen peeing on each other’s floors.