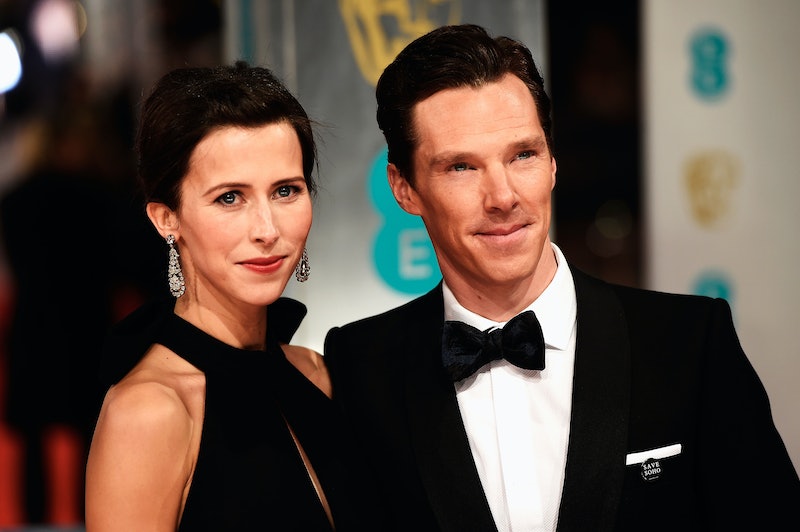 This Saturday brought happy news Benedict Cumberbatch and Sophie Hunter: According to Cumberbatch's rep, the happy, adorable couple welcomed what I'm sure is an equally adorable baby boy into the world. Move over Princess Charlotte (OK, you don't have to move over, you are way too adorable for that), the Cumberbaby has arrived!

The official announcement was as simple and classy as the couple themselves. Confirming the news to PEOPLE , Cumberbatch's rep stated, "Benedict Cumberbatch and Sophie Hunter are delighted to announce the arrival of their beautiful son…we would kindly ask everyone to respect the family’s privacy during these next few precious weeks." While the proud parents are likely snuggling their newborn, that leaves the world to continue to speculate about what his name will be. After all, Benedict Cumberbatch has the coolest name in all the land — his son deserves an equally memorable moniker.

Until Cumberbatch and Hunter announce their son's name, I am going to enjoy imagining the many, many wonderful names he could have. Both his mother and father have classical, distinctly British names (Sophie, a variant of Sophia, means "wisdom," and Benedict means "blessed") — but, really, the sky is the limit for the Cumberbaby. With a last name like Cumberbatch, Hunter, or Hunter-Cumberbatch (if the happy couple chooses to hyphenate) he deserves an equally epic first name. Personally, I think any of these would suit him perfectly.

Two first names are better than one, right? Sir Arthur Conan Doyle created Sherlock Holmes and, let's face it, Cumberbatch will forever be associated with the character of Sherlock thanks to his iconic performance in Sherlock. Why not tip his hat to the character's creator? Also, say "Arthur Conan Cumberbatch" out loud and bask in how beautifully it rolls off your tongue.

Really, there is no need to hyphenate when Hunter is such a great first name. Hunter Cumberbatch just sounds like the stuff of legends.

Cumberbatch has been in his share of Shakespeare productions, and Hunter works primarily in theater. Their son is pretty much destined for the stage, so they might as well give him a strong, alliterative name. Claudias was Hamlet's uncle, and not a great guy, but gah — what a great name for the wee one.

As in, Martin Freeman? Eh? (Hey, a fangirl can dream, right?)

No, it is not pronounced "menses." Menzies is a strong British name that could easily outpace "Benedict Cumberbatch" as the most British name of all time.

Hey, the Game of Thrones season finale is Sunday, and Davos is basically the most noble character on the show. Maybe Cumberbatch and Hunter are fans?

Basil is another ultra-British name with the added benefit of Sherlock Holmes and theatrical connections thanks to the legendary Basil Rathbone. I would also love for the Cumberbaby to share his daddy's initials for reasons of cuteness.

Um — who wouldn't want to be named after a talking, fire-breathing dragon?

Cumberbatch took on the role of Julian Assange in The Fifth Estate and absolutely knocked it out of the park. He went on to call Assange "a hero in many ways" in a Rolling Stones interview. Plus, Julian is just a cool name, no matter what your feelings on Assange are.

Could the world contain the awesomeness of two Benedict Cumberbatches? I would love to find out.