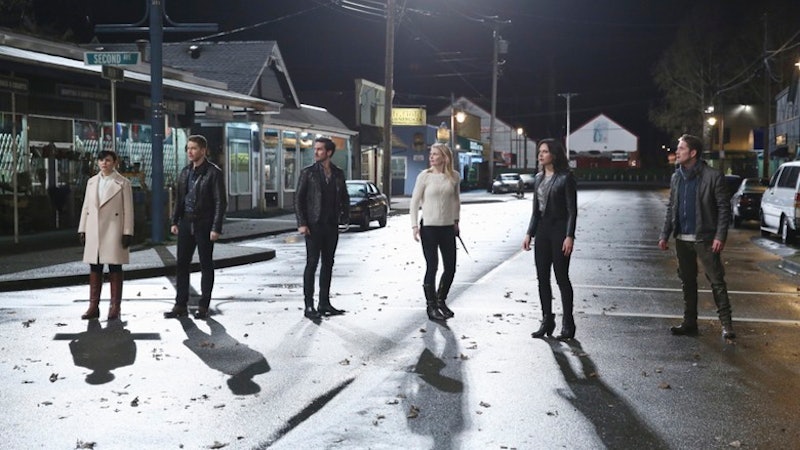 Once Upon A Time Season 5 is still more than three months away, but we're finally getting little crumbs of knowledge about what's to come once the series picks up at the end of September. It's not much, of course — hence my choice of the word "crumbs" — but when you've got a little imagination, you don't need a lot to start imagining some possible scenarios. Take, for instance, the recent casting call put out by Once showrunners, looking for actors to play Merlin, Arthur, and Guinevere. We might not know what their storylines will entail, but we know they'll be in Season 5, so it's not such a far leap to make to assume that not only might we end up outside of Storybrooke for part of the season, but we'll likely be going to Camelot.

The classic story of The Sword and the Stone is well known to Disney and fairy tale fans alike, and it's one of the few that comes to mind that hasn't already been featured on Once. It also just so happens to be rather convenient timing to bring in the new characters, given that finding Merlin is of utmost importance because of the whole "Emma is the new Dark One and Merlin's the only one that can destroy the Darkness for good" situation we've got going on. If our heroes in Storybrooke are going to find Merlin, they'll have to take a bit of a trip to a land far, far away — likely Camelot, which is where Arthur and Guinevere will be introduced, as well.

Given that finding Merlin and seeking the powerful wizard's help in freeing Emma from the dagger and getting rid of the Dark One altogether, it's unclear how Arthur and Guinevere's story will figure into the big picture, and how important it will be. It could be that Merlin is reticent to step in to help the Storybrooke crew and it's Arthur and Guinevere that convince him otherwise. Perhaps Regina, Snow, Charming and company meet Arthur and Guinevere first upon arriving in Camelot, and they offer to escort the guests to wherever Merlin currently finds himself. Or I could be completely off the trail and it could be something entirely different. Who can say?

Of course, I wouldn't get too attached the idea of any of the three new castings to stick around permanently, as all of them — including Merlin himself — are likely to serve as means to an end in getting Emma restored to her old Savior self and banishing the Darkness. But something tells me that it won't all be so simple. After all, heroes need villains to fight, and if the Darkness is gone and peace is restored in Storybrooke, what is there left to battle over? The Evil Queen has long since faded into a much more likeable Regina, Gold is powerless now that he's no longer the Dark One, and Emma is the product of True Love and her light magic will no doubt win out in the end. The Darkness needs to be conquered, but it's pretty obvious that's something that will likely take most of Season 5 to accomplish. Where Once will go from there, I don't know — but I'll be on board to find out.