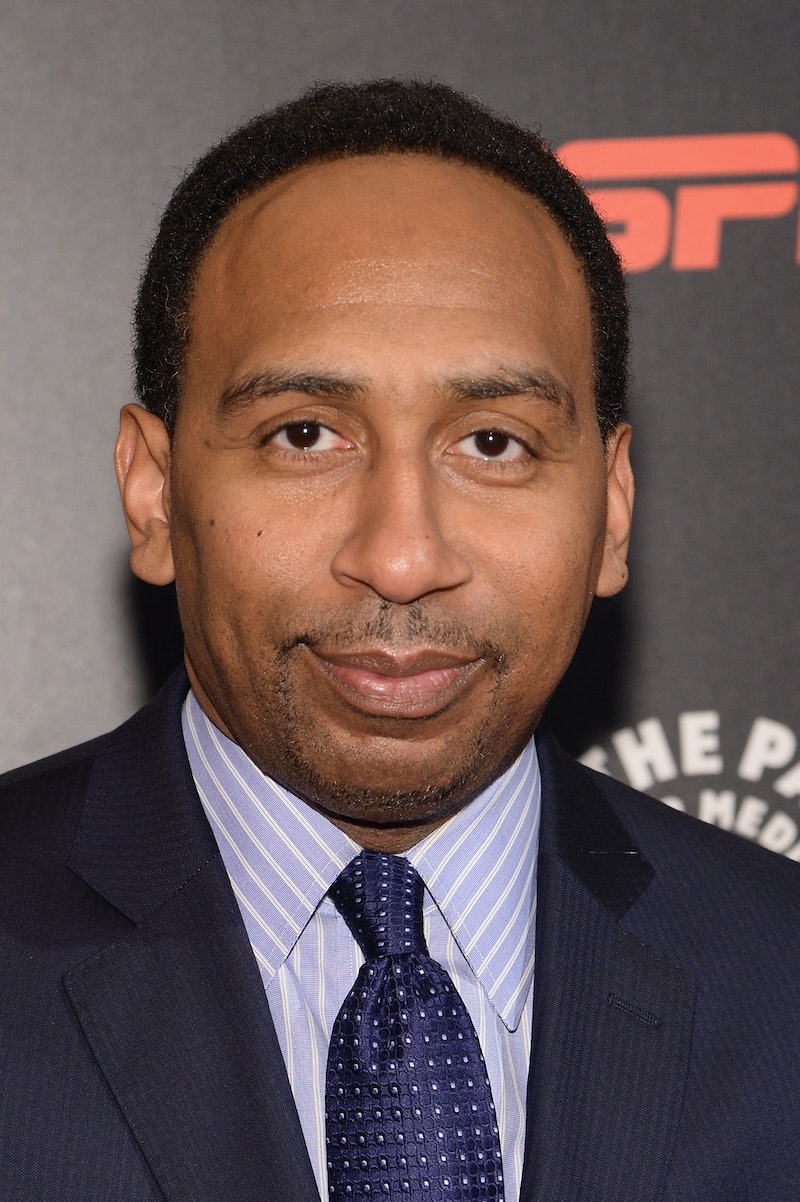 You kind of got the feeling it wouldn't take long for this shoe to drop. Having absorbed a great amount of criticism since Thursday night, including from colleagues, ESPN's Stephen A. Smith apologized for his sexist joke about Germany's Women's World Cup team. Although, in view of his history of offensive on-air comments, it's up to you to decide whether it went far enough.

For the unfamiliar, here's what happened: Smith, along with former NBA player and ESPN analyst Tim Legler, was narrating a highlight package on Thursday night, one which included a clip of Team Norway midfielder Maren Mjelde scoring a clutch, game-tying free kick goal against Germany. As the kick sailed over the heads of the German women's line, many of them craned their necks to follow its course, watching as it dinged off the upper-left corner of the goal and slid into the net. It was a prototypical dramatic sports moment — elation for one side, deflation for the other.

Legler began by remarking that "these young ladies all turned their head, they didn't want to catch one in the grill" — not exactly covering himself in glory, either. But what Smith added reduced the moment entirely to a gendered stereotype. Seeing the German players turn their heads as the ball arced past — because it had gotten past them, and they were obviously more than a little curious whether it would go in — Smith remarked that they "might not have wanted to mess their hair up."

Needless to say, this hasn't gone over well. Smith has been the target of pointed criticism from countless people on social media, including women who work covering professional sports, such as Buzzfeed's Lindsey Adler, and San Jose Earthquakes reporter and Bay Area radio host Kate Scott.

As Mashable pointed out, even ESPN: The Magazine editor Megan Greenwell called Smith out for the sexist crack.

As detailed by Business Insider, ESPN released a statement saying that they "discussed this with Stephen A. last night and he understands the comments were wrong." Smith would go on to issue an apology in the form of a handful of tweets on Friday, but was it enough? You be the judge.

For some additional context, this is not the first time Smith has been forced to make an apology for some ill-considered on-air comments. Just last year, while discussing the Ray Rice domestic violence scandal which embroiled the NFL, Smith suggested that people should "make sure that we learn as much as we can about the elements of provocation." He initially defended those remarks, insisting he'd been misconstrued, before apologizing, calling the incident "the most egregious error of my career," and accepting a one-week suspension from ESPN.

More like this
What Is Jeanie Buss' Net Worth? The Lakers President Is Uber Rich
By Hugh McIntyre
Jake Daniels Just Became The UK’s First Active Football Player To Come Out As Gay Since 1990
By Sam Ramsden
23 Abortion Funds In States With Trigger Bans To Donate To
By Emma Carey
Sandra Bullock, Girlboss Extraordinaire
By Matt Harkins & Viviana Olen
Get Even More From Bustle — Sign Up For The Newsletter