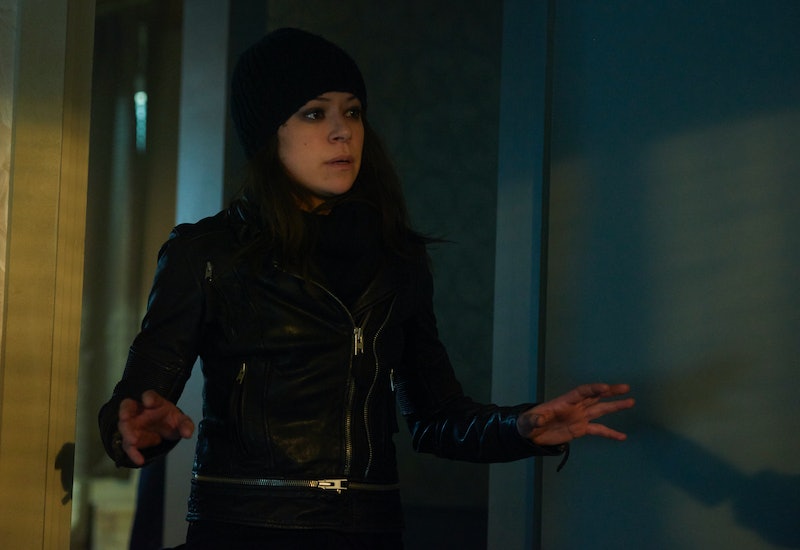 After a season of searching, Orphan Black has finally revealed the Castor original. There's also a huge twist to that Castor original, or better yet two huge twists. Actually, nope, scratch that, three huge twists. Because Orphan Black can't just do one twist simply, it's gotta throw two other wrenches into the big reveal. But Orphan Black, that's why we love you, even though this twist did actually make me grab my head with distraught and whisper to myself, "oh god." After Rachel's attempt to decode the Island of Dr. Moreau book sort of worked and sort of failed, Sarah, Felix, and Mrs. S decide it's time to hop on a plane and fly across the pond. The code suggests London plays a vital role to Castor, and while that is literally the only cute they have to go on, and London is a very big city, they travel back home anyway. Mrs. S uses her connections to get information about this Castor riddle, and it's revealed that the weird code Rachel wrote at the very end (H46239) is actually a number for a prisoner. I just assumed it was a genetic code, because Orphan Black is whatever science wants it to be.

As Kendall explains, she was in prison when Ethan Duncan came a-knockin' looking for test subjects. Since Kendall absorbed a twin brother in the womb, she's got a male and female strand of DNA in her (because, science). Duncan saw her as a great subject. She's part female, and also part male; two clones for the price of one! And then, she's Mrs. S's mother, which literally no one can process, not Sarah, not Mrs. S, not even me, because this is when I grabbed my head and went, "oh god." Mrs. S is ready to destroy all traces of this original, as in kill Kendall — which was always the intention for this little vacation — but Sarah talks her out of it. Instead, the three of them leave together. Kendall is now the key to unlocking everything for both the male and female clones. Hopefully. Part of me is still worried that this is a complete fake out, and Castor (who appears to be more evil than Leda) has planted this all along for Sarah to fall into their trap. It could very well be a trap, some thirty years in the making. Isn't it a little too convenient for the original to already have family ties to the females? Also, if some of the genetic code of Kendall is also in Sarah, shouldn't Mrs. S have, I dunno, noticed that or something? Science is weird, man.