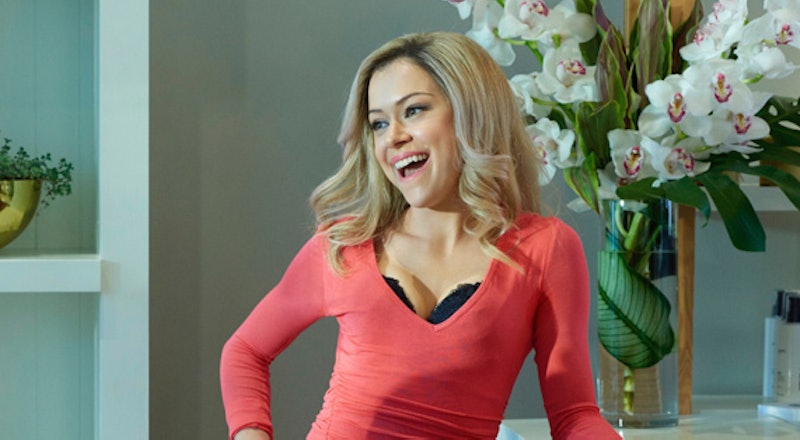 This past season on Orphan Black, you might have been so distracted by the parade of new male clones to realize that the show hadn't even introduced any new female clones. For the past two seasons, there's always been a surprise new clone at sometime, whether it was the swimmer, Jennifer, or the transgender clone, Tony. Now, as we gear up to say goodbye to Season 3, it's time to meet the new clone, Krystal. You might remember her from a few episodes back, when we briefly saw her being shoved into Castor's car trunk. Now she's crossing paths with Dyad, and Krystal wants to know why Castor is out to get her. Something's weird. We first meet Krystal in "The Weight of this Combination." We only see her on security footage taken from the hotel, that shows her leading a Castor boy back to her room (it looks like Rudy), and then we cut to two clones trying to shove her in a trunk. She escapes, thankfully, and the clones are taken away, thankfully, but then all charges against them are dropped. Krystal thinks this is really weird, and that's when she starts to add everything up. It's Delphine who goes to visit her first. Krystal works at a nail salon, and, well, she's your typical bright-eyed and bubbly nail salon employee. She wears a low-cut top and is always chewing gym. Krystal's always been like this, but now she's much more talkative, so I would have love to have seen her when she wasn't talking a mile a minute. As she tells Delphine, she doesn't have anyone else to talk to, so she'll talk to whoever is in front of her. Krystal also does a pretty mean manicure. Then, she spills some secrets.

The secrets really start rolling with Felix, who is forced to get his nails done for clone answers. He drops his accent (it's weird) and then he hits on Krystal (that's even weirder). She eats it right up. She also can't help musing that the past few boyfriends she's had have been on a 2-year rotation almost to the day. Basically, she's caught onto the pattern of her boyfriends-by-day, monitors-by-night. It takes being shoved into a car trunk for her to really sit back and think about her life, and Krystal is starting to piece everything together. She's got her own little Castor diary of the whole situation (it's pink) and Felix realizes she's coming close to discovering everything. There's nothing too out of the ordinary about Krystal, except for the fact that she's a clone. So now I'm wondering, why did castor try to kidnap her in the first place? I know they've been trying to get their hands on a female clone, but with Sarah and Helena they wanted them for their reproductive properties — right? So why Krystal?

Another thing. When the Castor boys tried to grab Krystal, they already had Helena locked up. Why a second one? Also, why Krystal? Wouldn't it have been easier to grab someone else, or really lure Sarah to the base? So far, everything about Krystal, and everything that's happened to her, has been a bit fishy. It also sounds like we're never going to know the mystery surrounding her, either. The last few seconds of "Ruthless in Purpose and Insidious in Method" shows that Krystal is putting on a great performance as a comatose Rachel, and when she wakes up — if she ever wakes up — she's going to be missing an eye. Just as quickly as she was introduced, she's gone. Pour one out for this lost Dyad clone, we'll probably never get answers to our clone Krystal questions.