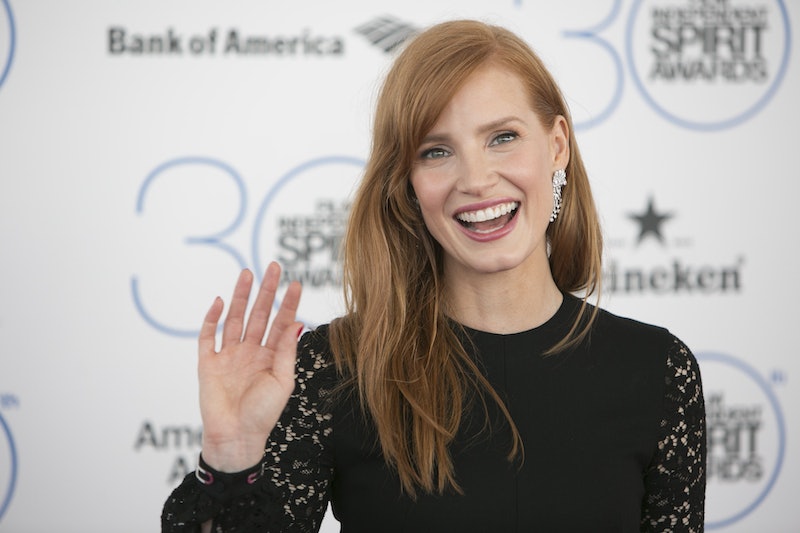 To the casual observer, it's easy to get Hollywood actresses confused. After all, so many of them look practically identical, despite not being related; you've got your Minka Kellys and your Leighton Meesters; your Amy Adamses and your Isla Fishers; your Katy Perrys and your Zooey Deschanels. The most striking pair of celebrity twins, however, might be Bryce Dallas Howard and Jessica Chastain, who are so identical they had to make a hilarious video clarifying that they're not actually the same person. Apparently, though, their efforts didn't work, as despite Howard's name in the promos, the Internet believes that Jessica Chastain starred in Jurassic World . Seriously.

I mean, people are convinced. No matter that both actresses are majorly successful (Chastain is the Oscar-nominated star of films like Zero Dark Thirty and The Help, while Howard gained fame through the Twilight series and 50/50) or that they put in all that effort to remind fans they're not the same person: to many people, it was clearly Chastain battling dinosaurs and romancing Chris Pratt.

Thankfully, both actresses seem totally cool about their resemblance to one another, and probably find the whole thing entertaining, not annoying. But still: get it right, people. Chastain and Howard are each great actresses, and they both deserve recognition for their own movies. Confusing them may be easy, but it's not fair: don't you think Howard wants credit for sprinting down roads while wearing high heels all movie? That's an impressive feat, and while Chastain has done some crazy stunts of her own, this one is all Howard's.

Unfortunately, plenty of people didn't get that memo. Here are some of the best reactions to "Jessica Chastain" in Jurassic World:

And the people who just found out it wasn't her:

Including this poor person, who's probably spending the next few days questioning everything she's ever known:

Get it right, everyone. Jessica Chastain is not Bryce Dallas Howard. As for Katy Perry and Zooey Deschanel, though...

More like this
You Can Thank 'Spider-Man' For The Meme-ification Of Movies
By Dana Schwartz
'Stranger Things' Star Joe Keery Is Dating An "Indie Scream Queen"
By S. Atkinson and Grace Wehniainen
Laura Dern Said “Cultural Awareness” Made Her Rethink This 'Jurassic Park' Fact
By Grace Wehniainen
Colin Firth Revealed His Favourite Mr. Darcy (& No, It's Not Himself)
By Sophie McEvoy
Get Even More From Bustle — Sign Up For The Newsletter