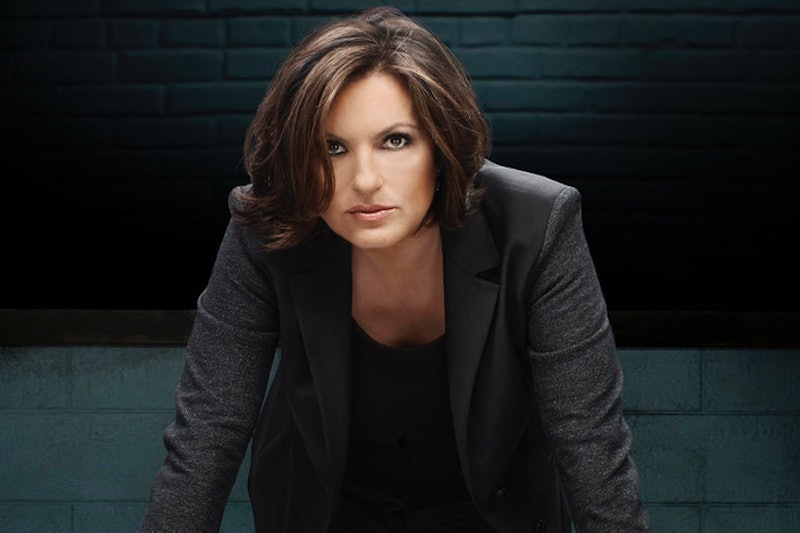 In perhaps the most epic meeting in history, Olivia Benson has finally met Olivia Benson. Not sure what I mean? Well, for those woefully in the dark, one of Taylor Swift's cats is named Olivia Benson, after Mariska Hargitay's badass character from Law & Order: SVU. (The other is named Meredith Grey, proving T-Swift is just as obsessed and in love with TV shows as we are.) Olivia Benson has been with Swift since last year, but lately, the singer has befriended Hargitay, who appeared in her music video for "Bad Blood." It was only a matter of time before the two Olivia Bensons met — and at Saturday's show on Swift's 1989 World Tour, it finally happened.

And it was wonderful. On a Saturday night tour date, Swift pulled Hargitay and fellow T-Swift friend (and "Bad Blood" star) Cara Delevingne up onstage with her, and while that was probably an awesome, memorable moment for fans, what happened backstage was just so much more unforgettable.The two Olivias' meeting begs the question: what would come of an actual Olivia Benson/Olivia Benson pairing? Could Hargitay and Swift's cat team up and solve New York City's especially heinous crimes, together?

Thankfully, T-Swift caught the meeting of Cat-Olivia and Human-Olivia on Instagram for the world to appreciate, and the crime-solving theories are already forming:

So what could we expect from an Olivia Benson-squared team up? For one, Cat-Olivia would contribute some great reflexes. And the pet-food company Purina claims that cats help with overall mood and stress levels. They can even detect when their owners are going to have seizures. The stress and mood advantage would be particularly useful for Human-Olivia, considering the horrible cases she has to work on a daily basis. Plus, considering that T-Swift named her cat Olivia Benson, I can only assume she's a badass, independent cat who could easily match up with her human counterpart.

In the Season 16 finale of Law & Order: SVU (SPOILER ALERT!), Olivia's partner Detective Nick Amaro left the NYPD and moved to California to be with his family. With that loss, Olivia Benson could probably really use a new partner right about now. Why not Cat-Olivia? It would be nice to have another woman on the squad, and it could be interesting twist to see a cat detective on the show. 16 seasons in, the writers are probably looking for some kind of fresh new angle, and boy, do I have a good one here. Nothing says hit TV like a cat-human detective pair, with a T-Swift soundtrack to make it even better.

More like this
The Very Best Quotes From Dr. Taylor Swift’s NYU Graduation Speech
By Grace Wehniainen
This Is How Taylor Swift Feels About Joe Alwyn’s Steamy New Series
By Alyssa Lapid
Taylor Swift Is "Spiraling" After Releasing "This Love (Taylor's Version)"
By Jake Viswanath
Joe Alwyn Just Shared The Sweetest Taylor Swift Memory
By Sophie McEvoy
Get Even More From Bustle — Sign Up For The Newsletter